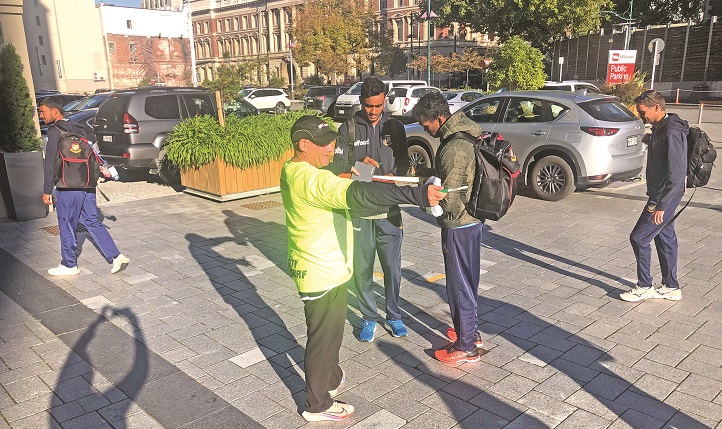 Mahedi Hasan, Bangladesh’s new kid on block said on Sunday that they want to leave behind their disappointing performance in the opening against New Zealand and look forward.

“It was rather a bad day for us, as none of us could play according to our merits, so we’re trying to leave the first match as past and now looking forward to the rest of the matches. We have a tremendous team combination, and if we utilise it to the fullest, then we’d do better InshaAllah,” Mahedi who debuted in the opening game said on Sunday.

“A cricketer always remembers his/her debut international match, as it is the match in which they are finally getting an opportunity to represent their country at the international level, so they always cherish it. However, the last match wasn’t a great experience for me, it surely would have been if we could win the match, but I still have the debut series to look forward to it,” he said.

Bangladesh made a disastrous start to their New Zealand tour, losing the first one-day international by eight wickets in a one-sided affair at the University Oval in Dunedin on Saturday.

Bangladesh batters had no answers to the Kiwi pace attack in a typical bouncy track in New Zealand conditions, as they got rolled over for a mere 131 in 41.5 overs after being asked to bat first.

In reply, Martin Guptill dispelled any chances of Bangladesh putting the hosts under some pressure with a quick-fire 38 off 19 balls and after his dismissal fellow opener Henry Nichols hit an unbeaten 49 to take them to 132-8 in 21.2 overs.

Mahedi said that the bowlers didn’t have enough runs on the board to defend. “Our bowlers had done a wonderful job, but they didn’t have enough runs to defend, which caused the New Zealand batsmen to get on the upper-hand and attack the seamers, especially Martin Guptill, who was in my opinion, the difference-maker among the other batsmen, as the others didn’t seem to be as much relaxed as him. All of our bowlers did a good job, as Hasan (Mahmud) and Mustafizur (Rahman) were great, but Taskin (Ahmed) in my opinion, was exceptionally good among the others,” he said.

“It is obvious in these wickets, that if batting first, we need to post something around 260-280 runs, to put up a challenge against the New Zealand batsmen, but it’s a shame that we couldn’t do so; but as far as I think the bowling combination we have right now is worthy enough to have a competitive game against the hosts, if our batsmen can take responsibility and post a good total to defend,” he concluded.