BCB to reconsider his NOC for IPL 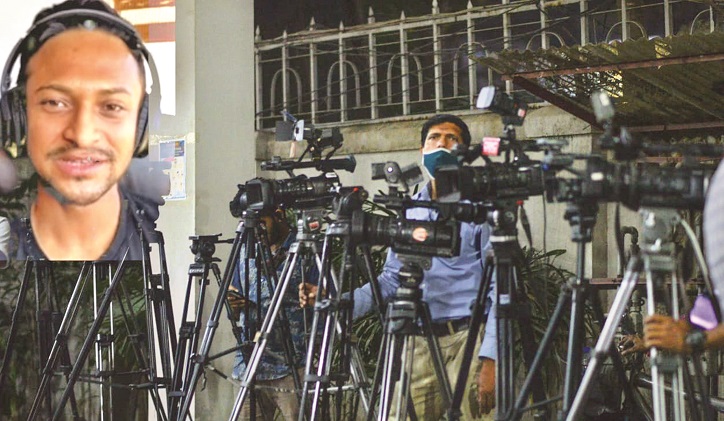 Reporters from different media wait for BCB president Nazmul Hasan Papon on the premises of his residence after Shakib slams BCB for misinterpretation of his letter.

Bangladesh all-rounder Shakib Al Hasan rocks again despite sitting in the USA he managed to create the buzz by announcing that he was misinterpreted by the national board regarding taking part in the Indian Premier League.

Furthermore, he raised questions regarding different organs of BCB that forced its president to call an emergency meeting at his house on Sunday.

After the meeting, BCB cricket operation chairman Akram Khan said that they will reconsider the NOC of Shakib regarding taking part in the IPL.

“We will reconsider the NOC of Shakib regarding taking part in IPL as he wants to play Test,” BCB cricket operation chairman Akram Khan told reporters on Sunday who was accused of misinterpreting Shakib.

The ace all-rounder during his aggressive live programme where he stated that BCB cricket operation chairman Akram didn’t read his letter properly regarding skipping the Sri Lanka tour and opting for IPL and as a result, the whole nation was misguided by it.

“Continuously people are talking about this Test (skipping the series against Sri Lanka). The people who are saying that I will no longer play the Test or don't want to play the Test haven't read my letter properly and that is it,” Shakib was quoted as saying in a live show.

“Maybe he also said this in an interview yesterday. I guess he didn't really read my letter properly. And whatever decisions they have taken, I believe that they have taken it after discussing among themselves,” he said, adding that he is thankful to BCB president Nazmul Hasan for backing his decision and permitting him to play the IPL.

“I want to thank Papon Bhai (Nazmul Hasan) as I believe he has made the right decision, and I think that a player should have the liberty. I believe the cricketers’ confidence increases if the board or BCB president backs up a player like this. And when a player represents the national team, the responsibility to do something good for the team also increases. We have to thank Papon Bhai for making the right decision from his place. However, Akram Bhai repeatedly said that I do not want to play Tests, which I have not mentioned anywhere in my letter,” he said.

Shakib added that he was ready to skip any format to make sure that he is available in the IPL as that will help him prepare better for the next ICC T20 World Cup, scheduled in India from October.

“Even if there was an ODI series at this time, I would have done the same,” he said.

“These two Tests are our last matches in the World Test Championship so it is not as if we are going to play the final. We are at the very bottom of the points table. I don't think it makes much of a difference. The other major reason is that the World Cup T20 is in India later this year. It is a very important tournament where we have much to achieve. There isn't much to achieve in these two Tests. I think it is a better option that I prepare myself for something bigger,” he said.

Shakib criticised the BCB's decision to hold the Test series during the IPL that suggests playing Sri Lanka in the ODI’s from May 20 also did not go well with him as it will also clash with Shakib's IPL commitment.

Shakib added that BCB had always given less value to its cricketers.

“No other cricket board holds international matches during the IPL,” he said.

“Only we are playing against Sri Lanka. Do you ever see any Afghanistan cricketer playing for their country during the IPL? Their board makes sure the players are free to play in the IPL. If we don't value our players, how can you expect us to perform well when playing for Bangladesh? I will let you in on a brutal truth. When overseas players come to Bangladesh, we call most of them ‘Sir’ or ‘Hujur’, but we do not see our experienced cricketers the same way. If the people, board and players do not respect you, you can't expect them to respect you,” he said.

Shakib also questioned the role of the High Performance Unit and their long-term planning and suggested that some of the BCB directors who have played for Bangladesh in the past haven't done much to progress the game.

“Not having back-up players is really disappointing. I don't know how many players have come from the High Performance squad. We have a number of people on the cricket board who have played for Bangladesh, but apart from (Khaled Mahmud) Sujon Bhai, they are not too involved. Sujon Bhai and Papon Bhai must be credited for the 2020 Under-19 World Cup win,” he said.

“But I can't find any more people from the board to give credit. I don't think they think much about cricket (laugh). We hardly talk about these things. Even our journalists are focused on small things. They don't look at the big picture, like how many players we produced in the last five years,” he concluded.