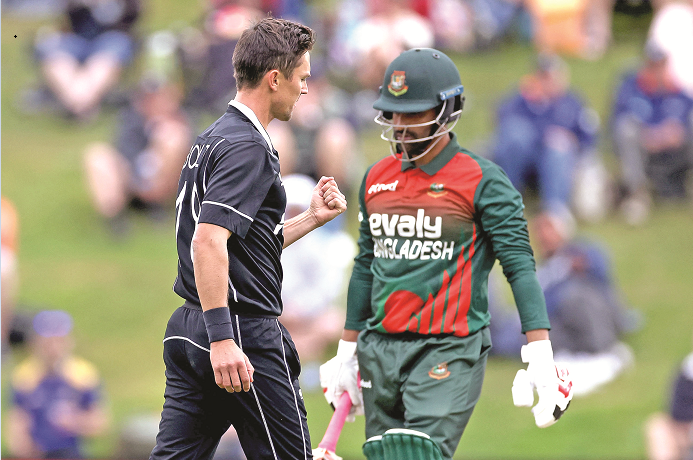 Bangladesh ODI captain Tamim Iqbal on Saturday said that his batsmen must shoulder the blame for showcasing a shameful batting performance against New Zealand in the opening match of the three-match ODI series.

The Tigers were convincingly outplayed by the hosts in Dunedin by eight wickets after the visiting batsmen failed to demonstrate any resistance against the Kiwis and were bowled out for 131 runs in 41.5 overs with pacer Trent Boult claiming 4-27.

New Zealand, who decided to bowl first, made light work of Bangladeshi bowlers in the chase as they reached 132-2 in 21.2 overs to go 1-0 up in the ODI series.

“Though it was quite difficult to bat in the morning, we have to refrain from overlooking our mistakes. I take a lot of pride in our batting and I don't think getting bundled up for 131 runs is good for us at all,” Tamim, who turned 32 on the same day, said after the match.

“The problem is we had four-five soft dismissals, which pushed us to the back foot early in the game. There were mistakes in shot selection, which led to the soft dismissals.

“If we learn from our mistakes, and score at least 260-270, then the result will be different. The batsmen must step up and give the bowlers something to defend,” he said adding that he is not ready to make preparation as an excuse.

“There shouldn't be an excuse regarding the preparations. We had practised quite a lot during the quarantine period as we had practised in Queenstown and in here too (Dunedin). So we were mentally prepared on what to expect from New Zealand or how the conditions should be,” he added.

Bangladesh pace bowler Taskin Ahmed echoed the same sentiment adding that he is expecting to put up a better in the next game.

“We only have ourselves to blame at this point, for not posting a moderate total,” said Taskin.

New Zealand pacer Boult expressed his satisfaction of getting a comprehensive win that too in the absence of key players Kane Williamson and Ross Taylor.

Three players- Daryl Mitchell, Devon Conway and Will Young were debuted for New Zealand in the contest but Bangladesh failed to take any advantage of that in the contest where they also gave the debutant’s cap to Mahedi Hasan.

“I think the group is pretty familiar with the style of cricket we want to play in this format. It is pretty unique that we had three ODI debuts today.

“It is a little different not to have Kane and Ross in that line-up but it is nice to know there's a bit of depth there. The guys are hungry to get out there and stamp their authority,” he added.

The two teams will now head to Christchurch for the second ODI which will be a day-night affair on March 23.