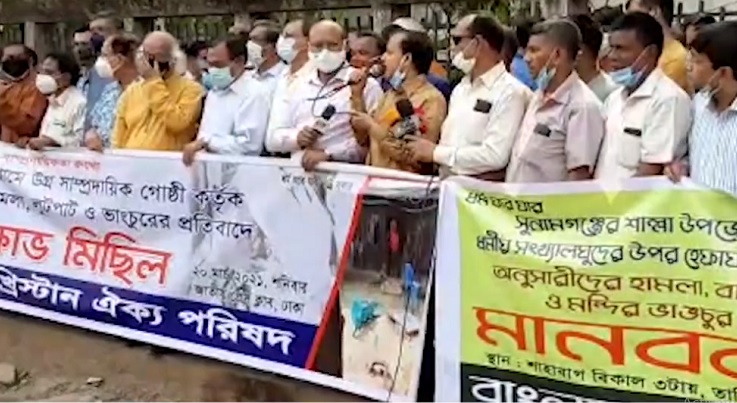 Ten eminent citizens have protested vandalising and looting at least 75 Hindu houses in Sunamganj by fundamental group and called for resisting communal forces.

Aggrieved by Hefazat-e-Islam's Joint-Secretary General Mawlana Mufti Mamunul Haque’s speech opposing sculpture of Bangabandhu, a Hindu youth of Noagaon village of Sunamgan made a critical comment on the face book.

Protesting the attack, 10 eminent citizens issued a statement on Saturday.

"We are appalled by the incident during the tenure of Prime Minister Sheikh Hasina," the statement reads.

They demanded immediate arrest of Hefajat leader Mamunul Haque and the other culprits involved in the incident.

Hefajat and Jamaat dared to carry out such attacks at different places of the country in the last few years after being indulged by different quarters, they said.

The statement issuers urged BTRC to take steps against the communal forces who have been defaming progressive citizens on social media.