Biden faces Trump's deadline on Afghanistan troop withdrawal: 'Any way you cut it, we are headed for a messy outcome' 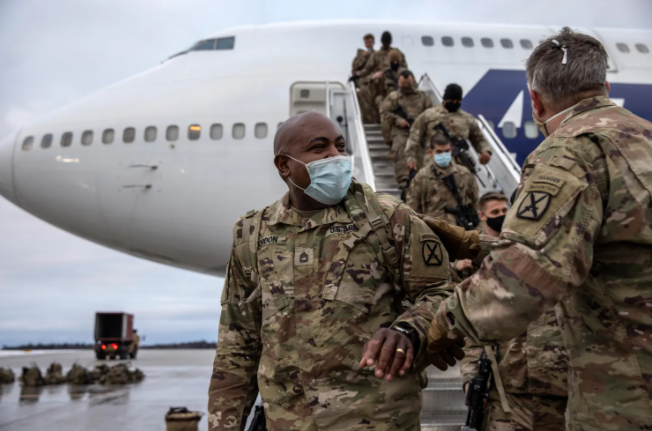 President Joe Biden is under mounting pressure as he weighs whether to fully withdraw U.S. troops from Afghanistan by May 1, a deadline negotiated by the Trump administration.

Some of Biden's key allies in Congress are warning that a complete U.S. withdrawal will thrust Afghanistan further into chaos and violence. Others say keeping U.S. troops on the ground any longer could spark a backlash among progressives – and American voters – who want to see an end to America's longest war.

In an interview with ABC News on Tuesday, Biden said it would be "tough" to meet the May 1 deadline.

"It could happen, but it is tough," he said. "The fact is that, that was not a very solidly negotiated deal that (Trump) ... worked out." The president said that even if the U.S. did not meet the May 1 deadline, U.S. troops would not be in Afghanistan for much longer.

Biden's advisers have signaled that a range of options are under consideration, in what is likely to be the first high-stakes foreign policy decision of the new administration.

"Any way you cut it, we are headed for a messy outcome," Andrew Bacevich, president of the Quincy Institute, which advocates for military restraint, said on a recent call with reporters.

The May 1 timetable is part of an agreement the Trump administration forged with the Taliban in February 2020. Under that deal, the U.S. agreed to withdraw all its forces; in exchange, the Taliban promised to sever its ties with al-Qaeda and end its attacks on American forces. The Trump administration began a drawdown of U.S. forces, and about 2,500 U.S. troops remain in Afghanistan now.

Several top Senate Democrats say the Taliban have not lived up to their commitments, and that a hasty U.S. withdrawal would be a mistake.

“We’ve got to be able to assure the world and the American public that Afghanistan will not be a source of planning, plotting to project terrorist attacks around the globe,” Sen. Jack Reed, chairman of the Senate Armed Services Committee, told reporters during a recent video session hosted by George Washington University. "That’s the minimum. I’m not sure we can do that without some presence there."

Experts say the Taliban have not cut its ties with al-Qaeda, which used Afghanistan as a safe haven from which to plan the Sept. 11 attacks on the U.S.

Additionally, the Trump administration's deal with the Taliban was supposed to usher in negotiations between the Taliban and the Afghan government for a power-sharing agreement, but those talks have stalled. And while the Taliban have not targeted American soldiers over the last year, the militant group has escalated its attacks on the Afghan government's security forces and civilian casualties remain high.

On Monday, a bomb targeting a minibus in Afghanistan’s capital wounded at least 15 civilians, the Associated Press reported, part of a nationwide spike in violence. The government has blamed some attacks on the Taliban, while the Islamic State affiliate in Afghanistan has claimed responsibility for others.

"The Taliban is clearly not abiding by all of its commitments under the Feb. 29 agreement, and it's raising serious questions about the future of Afghan security and governance," Sen. Bob Menendez, chairman of the Senate Foreign Affairs Committee, told a small group of reporters during a roundtable last week.

"No one wants to bring our sons and daughters home as much as I do. But I also don't want to have shed so much blood and national treasure, and see it fall back into chaos," Menendez said in urging the Biden to reconsider the May 1 deadline.

Paul Pillar, a former U.S. intelligence officer for the Near East and South Asia, said the lingering trauma of the Sept. 11 attacks makes any debate about Afghanistan particularly fraught.

There's a "reluctance on the part of any U.S. administration to pull the plug on the Afghanistan endeavor," lest it be followed by another terrorist attack connected to the country, he said during a March 11 forum.

"Then the administration that did the pull out would be taking the political heat for it," said Pillar, now a fellow at Georgetown University's Center for Security Studies.

When Trump announced the U.S.-Taliban peace deal, many Republicans were critical. Defense hawks like Rep. Liz Cheney, R-Wyo., said the Taliban could not be trusted, and U.S. withdrawal should be dictated by conditions on the ground, not "arbitrary deadlines."

Sen. Lindsey Graham, R-S.C, has said he believes Biden will keep U.S. forces in Afghanistan beyond May 1.

"They're reevaluating our presence in Afghanistan to keep the footprint low, but not to walk away and lose all the gains we've achieved," Graham said on CBS News in February. "If we leave too soon without a conditions-based withdrawal, ISIS and al-Qaeda will come roaring back. Women will suffer greatly. So they're in a good spot, I think, on Afghanistan."

Like Trump, Biden campaigned on a promise to end America's "forever wars." The 20-year conflict in Afghanistan has cost more than $2 trillion and more than 2,300 American lives. More than 38,000 Afghan civilians have been killed.

Many experts say the situation in Afghanistan will not improve no matter how much longer the United States stays, or how much more money Washington invests. The Taliban now control vast swaths of the country, and it continues to be wracked by violence despite U.S.-brokered peace talks.

"We would be waiting in perpetuity" if the goal is to loosen the Taliban's grip on Afghanistan or change other dynamics on the ground, said Rep. Ro Khanna, a leading progressive in Congress and member of the House Armed Services Committee.

"The American people have wanted us out of Afghanistan probably for the last decade," Khanna said, adding that the issue cuts across party lines. "We're spending $50 billion a year there. Our troops are in harm's way. It's the longest war in American history."

He said the Biden administration should withdraw in the coming months, while also warning the Taliban that the U.S. will use military force again if there's a reemergence of terrorist groups that threaten American interests.

Secretary of State Antony Blinken said last week that Biden has not made any decision yet.

"The president's goal is very, very clear," Blinken told members of the House Foreign Affairs Committee in March 1 testimony. "It's to bring our troops home, and it's to ensure that Afghanistan does not become a haven for terrorism and an ongoing threat to the United States."

Blinken is pressing Afghanistan's leaders to accelerate peace talks with the Taliban. The U.S. special envoy for Afghanistan, Zalmay Khalilzad, will attend a meeting in Moscow on Thursday with Taliban and Afghan government officials.

"This meeting will complement all other international efforts to support the Afghanistan peace process and also reflects the international community’s concerns about the progress to date," Jalina Porter, the State Department's deputy spokeswoman, told reporters on Monday.

In a recent letter to Ashraf Ghani, the country's president, Blinken said the U.S. did not want to "dictate" the terms of an agreement but urged the two sides to work quickly toward an power-sharing agreement and a permanent ceasefire. The letter was published by an Afghan news outlet last week.

"We are considering the full withdrawal of our forces by May 1," along with other options, Blinken wrote. At the same time, he voiced concern that a complete U.S. withdraw would result in more violence and allow the Taliban to make “rapid territorial gains.”

While the Taliban are known for their ruthless and repressive rule, they do not harbor the same kind of international terrorist ambitions as al-Qaeda and other groups.

Adam Weinstein, a research fellow at the Quincy Institute and Afghanistan veteran, said the Biden administration's decision should be guided by America's strategic interests, which is to leave Afghanistan after 20 years of costly conflict.

"The short-term leverage that the presence of U.S. troops might provide is not worth the cost of being pulled back into a failed counterinsurgency," he said.

Milt Bearden, a former CIA station chief in Pakistan and now fellow at the Center for the National Interest, said Biden has few, if any, good options in Afghanistan.

"This is a tremendously difficult decision," he said. "If we get out completely, there will be consequences that no American will in good time be happy with."