Befitting reply if anyone tries to create chaos: Quader 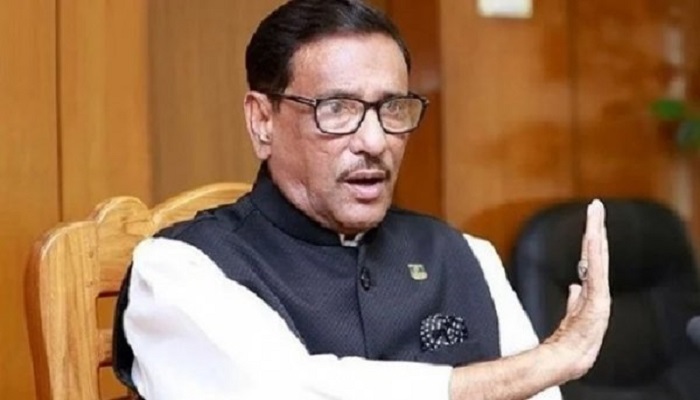 Awami League General Secretary Obaidul Quader said on Saturday his party remains ready to give a befitting reply if anyone makes evil attempts to create unrest during the ongoing celebration of golden jubilee of independence.

He was addressing a press conference at his official residence.

Quader, also the road transport and bridges minister, said AL is in power but it haven’t left the street, so there will be no benefit by threatening AL about movement.

He said AL is in power today through different movements and struggles.

The minister said India was the main ally of Bangladesh’s 1971 Liberation War. The head of the government of India was invited to join the celebration of the golden jubilee of independence and birth centenary of Father of the Nation Bangabandhu Sheikh Mujibur Rahman and this invitation was not extended to any particular individual, he said.

He said now it is clear who carried out attacks and looting at the houses of Hindu community at Shalla in Sunamganj ahead of the Indian Prime Minister Narendra Modi’s visit to Bangladesh.

This attack and looting were carried out as part of a pre-planned conspiracy, he said.

About the threat of repeating the 2013 Shapla Chattar incident, announcement of resisting the visit of Narendra Modi and the threat of throwing Bangabandhu’s sculpture to the Buriganga river, Quader urged the people to remain united under the leadership of Prime Minister Sheikh Hasina to resist the extreme radical forces.

Quader paid glowing tributes to former President Zillur Rahman, who was also a former AL general secretary and one of the organizers of Liberation War, on his 8th death anniversary.

“Zillur Rahman’s life and work will always remain as a source of inspiration to us,” he said.