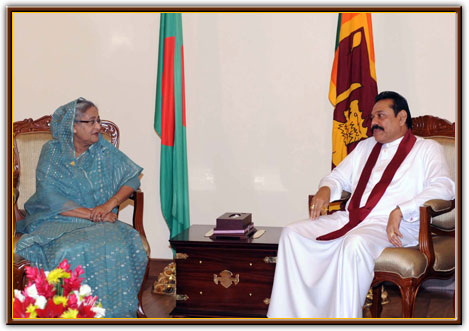 Before the formal delegation-level talks, the two leaders held a tête-à-tête.

Mahinda Rajapaksa was greeted by Sheikh Hasina as he reached her office at 11:00 am on Saturday.

Sources said that a number of MoUs are likely to be signed after the bilateral meeting to strengthen cooperation in various sectors of the two SAARC countries.

Prime Minister Hasina and Rajapaksha will witness the signing of the MoUs.

According to sources in the Foreign Ministry, there is a possibility of signing as many as five MoUs to enhance bilateral ties  in the areas of trade, investment and shipping.

The other areas include coastal shipping, preferential trade, and promotion and protection of investment, sources said.

Mahinda Rajapaksa arrived in Dhaka Friday morning on a two-day visit to join the celebrations of Bangabandhu Sheikh Mujibur Rahman’s birth centenary and the golden jubilee of Bangladesh’s independence. Later, he addressed a function at the National Parade Ground in the evening.