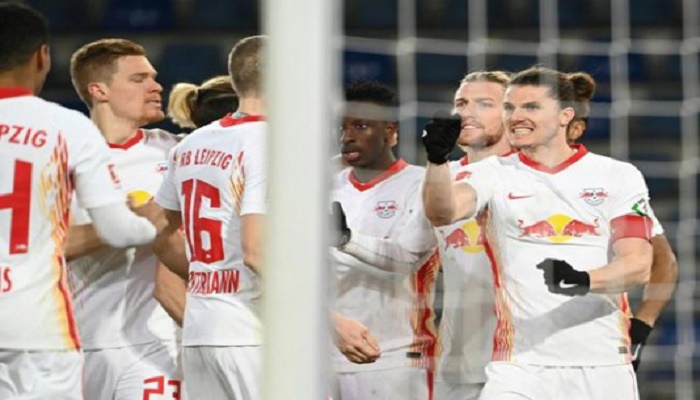 Marcel Sabitzer netted a second-half winner as RB Leipzig beat Arminia Bielefeld on Friday to keep the pressure on Bundesliga leaders Bayern Munich ahead of their top-of-the-table clash.

Second-placed Leipzig moved within a point of Bayern, who play Stuttgart on Saturday, and next face the reigning champions in the league on April 3.

"There were no fireworks because our opponents defended very deep. But we were calm and did things well," said Leipzig coach Julian Nagelsmann.

A draw with Champions League-chasing Eintracht Frankfurt last time out had seen Leipzig slip to four points off the pace.

Nagelsmann's men dominated against relegation-threatened Bielefeld from the start.

Arminia goalkeeper Stefan Ortega made an excellent early save from Emil Forsberg, before Marcel Halstenberg headed over just after the half-hour mark.

Forward Christopher Nkunku almost grabbed the opening goal shortly before the interval, but his effort was tipped onto the bar by Ortega.

The dogged hosts were broken down less than a minute into the second half, though, as Dani Olmo got in behind and squared the ball for Sabitzer to net a simple tap-in.

It was one-way traffic as Leipzig enjoyed 75 percent of possession and Bielefeld failed to muster a shot on target, and Ortega had to be alert again to prevent Nkunku adding gloss to the scoreline.

"We could have decided the game earlier, we made it unnecessarily exciting, but deservedly won over 90 minutes," Leipzig sporting director Markus Kroesche told DAZN.

"We have done our job. Now let's see what Bayern do."

Bielefeld remain one point and one place above the relegation play-off spot, currently occupied by Hertha Berlin.