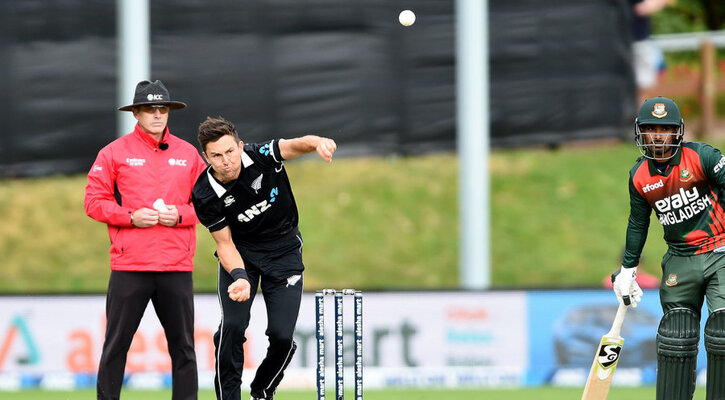 Bangladesh folded for 131 as they struggled to handle New Zealand's swing bowling ace Trent Boult in their opening one-day international in Dunedin on Saturday.

The innings was wrapped up in the 42nd over with Boult taking four for 27 while Mahmudullah's 27 from 54 deliveries was the top score for Bangladesh.

On a ground where the average winning score is in excess of 300, the tourists were sent into bat and found themselves in early trouble against Boult and later had difficulty with the variations of Jimmy Neesham and Mitchell Santner.

Tamim Iqbal produced a bold start with a six off Boult's third ball and a four off Matt Henry in the next over.

But, the first ball of Boult's third over slammed into Iqbal's pads and he was gone for 13, new batsman Soumya Sarkar went three balls later without scoring and Bangladesh never recovered.

Liton Das (19) and Mushfiqur Rahim (23) stayed together for nearly nine overs but added only 23 runs before both were removed by Neesham who also spilled a return chance from Mahmudullah and the ball deflected on to the stumps to run-out non-striker Mohammad Mithun who was backing up too far.

Neesham finished with two for 27 and Santner took two for 23.