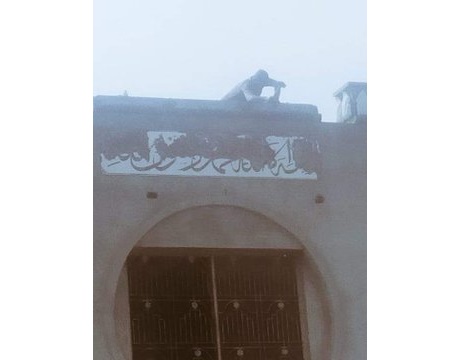 ISLAMABAD: An Ahmadi mosque in Garmola Virkan village, Gujranwala district on Wednesday was demolished by a mob of extremist Mullahs, with the help of police.

The information was shared by the Twitter handle of Bilal Farooqi, a Pakistani journalist who also posted pictures of the demolished mosque.
As per him, a mob of Mullahs, with the help of police, demolished the dome and minarets of an Ahmadi mosque and also desecrated the kalima inscribed on it.

"A mob of extremist mullahs, with the help of police, demolished the dome & minarets of an Ahmadi mosque in Garmola Virkan village, Gujranwala district and also desecrated the kalima inscribed on it. Will the Punjab govt please take action against these goons?" tweeted Bilal Farooqi.

Ahmadis, a four million-strong minority group in Pakistan, have been facing death threats, intimidation and a sustained hate campaign for decades.
Meanwhile, an unverified Twitter account of Mona Farooq Ahmed questioned the State's persecution of the Ahmadis - a marginalised community in Pakistan.

"Police helped a mob to demolish the dome and minarets of an Ahmadi mosque in a village Garmola Virkan, district Gurjranwal Punjab. When State is an accomplice to persecute an already marginalized community, is there any hope left for a progressive Pakistan?" tweeted Mona Farooq Ahmed.
Moreover, he also posted the video of custodians of Khatme Nabbuwat with some people after the desecration of the Ahmadi mosque who were seen shouting, "Inna lillahi wa inna elehi rajioon".

The mob was seen rejoicing at the demolition and desecration of the mosque.

Last year, a 168-page report by the UK-based All-Party Parliamentary Group (APPG) for the Ahmadi Muslim Community had revealed details about the discrimination the Ahmadi community has been facing in Pakistan.

The report titled "Suffocation of the Faithful - the persecution of Ahmadi Muslims in Pakistan and the rise of International
Extremism" categorically says that persecution against the peace-loving community intensified following the partition of the Indian subcontinent and the formation of Pakistan.

"This culminated in the events of 1974 when Prime Minister Zulfikar Ali Bhutto turned the anti-Ahmadi movement into fullyfledged state-sponsored persecution. He enacted a 1974 Constitutional Amendment specifically targeting Ahmadi Muslims, declaring them 'not Muslims for purposes of law and constitution'. It was a watershed moment in Pakistan's history", said the report.