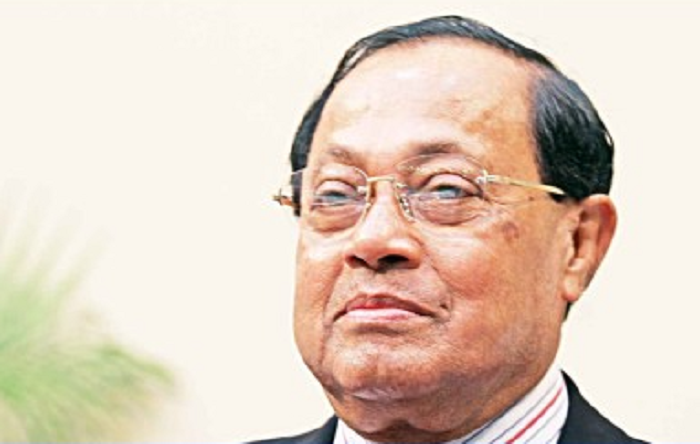 People from all walks of life, including politicians and lawyers, paid their last tributes to veteran BNP standing committee member and seasoned lawyer Moudud Ahmed at the Central Shaheed Minar, Nayapaltan and on the High Court Premises in the capital on Friday.

Two namaz-e-janazas of the BNP leader, who died in Singapore on Tuesday, were also held in the city before his body was taken to his home district Noakhali for burial.

The body of Moudud was brought to the Central Shaheed Minar around 9am enabling people to pay their last respect to the seasoned politician.

Queuing up before the coffin draped in national flag, leaders and activists of different political parties, including BNP, Gonoforum, Nagorik Oikya, JSD (Rob), Jagpa, Jatiya Party (Zafar), and Bangladesh NAP together with common people placed wreaths one after another and stood in silence for some time to pray for Moudud’s departed soul when his body was lying in state there for around one hour.

From the Shaheed Minar, Moudud’s body was taken to the High Court premises where lawyers paid their last respect to their late colleague.

The BNP leader’s first janaza was held in Singapore with the participation of Bangladeshi expatriates living there.

The coffin of Moudud was taken to BNP's Nayapaltan central office at about 11am and kept on a makeshift stage in front of it, enabling party leaders and activists to have the final glimpse of their late leader.

On behalf of BNP Chairperson Khaleda Zia and acting chairman Tarique Rahman, they also placed wreaths on the coffin and stood in solemn silence for a while paying homage to their late colleague.

Several thousand BNP leaders and activists gathered in Nayapaltan area and bid tearful adieu to their late leader. The third janaza of the BNP leader was held there.

In a brief address prior to the janaza, Fakhrul said Barrister Moudud Ahmed was not only a politician but also a legend of politics. “The void created through his death is irreparable.”

Describing Moudud as a guardian of the party, he said BNP will miss him and feel his absence.

Fakhrul prayed for the salvation of the departed soul and conveyed deep sympathy to his bereaved family members.

Later, Moudud's body was flown to Kabirhat upazila in Noakhali where his fourth janaza was scheduled to be held in Kabirhat Degree College field.

He is scheduled to be buried at his family graveyard in Companiganj's Manikpur area at 5:30pm after his last jazana at Bashurhat Government Mujib College at 4pm.

Moudud was admitted to Mount Elizabeth Hospital, Singapore for advanced treatment on February 1 as he had been suffering from various complications.