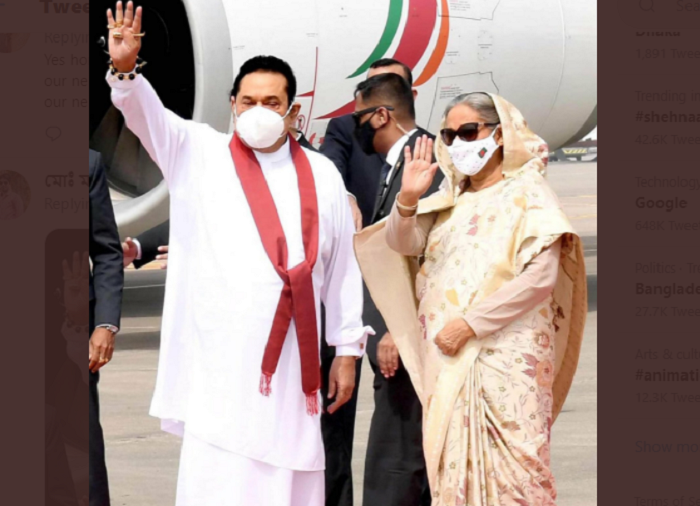 Sri Lankan Prime Minister Mahinda Rajapaksa, who arrived in Dhaka on Friday on a two-day state visit, has said his country wants to strengthen bilateral relations with Bangladesh.

"I look forward to engaging with PM Sheikh Hasina and the Government of Bangladesh to strengthen the bilateral relationship to mutually benefit both of our nations," he tweeted just before boarding a special flight for Dhaka.

Mahinda Rajapaksa is the second among the five South Asian leaders to attend the golden jubilee celebrations to mark Bangladesh’s independence from Pakistan after the 1971 Liberation War, which also coincides with the birth centenary of Father of the Nation Bangabandhu Sheikh Mujibur Rahman.

"I’m honored to be a part of the Golden Jubilee Independence celebrations and look forward to the next two days of festivities and discussions," the Sri Lankan Prime Minister said in another twitter statement upon his arrival at Hazrat Shahjalal International Airport when he was warmly received by Prime Minister Sheikh Hasina.

The red carpet was rolled out as Sri Lankan Prime Minister Mahinda Rajapaksa arrived in Dhaka on Friday morning. A 19-gun salute heralded Mahinda Rajapaksha's arrival as he stepped down from a special Sri Lankan flight at the airport at 9:45am.

Later, a guard of honour was given to the Sri Lankan premier by a smartly-turned-out contingent drawn from Bangladesh Army, Navy and Air Force there.

The Cabinet secretary, chiefs of the three services, and the principal secretary to the Prime Minister’s Office (PMO) were also present.

The Sri Lankan Prime Minister was then taken to National Martyrs’ Memorial at Savar where he placed a wreath to pay his respects to the liberation war martyrs.

“All those who cherished independence sacrificed their today for a tomorrow to all Bengali people which is a powerful testament to Bangabandhu’s dream for a free, independent, and proud Bangladesh,” tweeted Mahinda Rajapaksa while signing the visitor’s book. He also planted a sapling there.

Mahinda Rajapaksa attended a cultural programme and banquet hosted by the Bangladesh Prime Minister Sheikh Hasina at Hotel Intercontinental in the evening.

As per the programme schedule, Mahinda Rajapaksa will pay homage to Bangabandhu by placing a wreath at his portrait on the premises of Bangabandhu Memorial Museum at Dhanmondi road no.32 at 10am today. He will visit the museum and sign the visitor’s book there.

The Sri Lankan Prime Minister will hold a bilateral meeting with his Bangladesh counterpart at the Prime Minister’s Office (PMO) at 10:35am. The two prime ministers will then hold a delegation-level officials talks which will be followed by signing of several agreements between the two countries.

Ending his two-day state visit, Mahinda Rajapaksa will depart Dhaka for Colombo at 6pm. He will be seen off by Foreign Minister AK Abdul Momen.

Nepalese President Bidya Devi Bhandari will arrive in Dhaka on a two-day state visit on March 22 and Bhutanese Premier Lotay Tshering is scheduled to be here on March 24-25.

Indian Prime Minister Narendra Modi will arrive in Dhaka on March 26 on a two-day state visit.

The foreign heads of state and government are separately joining some identical programmes as part of the celebrations while Modi's visit would be an extended one which would take him to three places outside Dhaka.

The Indian premier will visit Bangabandhu shrine at (his village home) Tungipara and two Hindu temples outside Dhaka. The temples are places of worship of particularly the Matua community, a large part of them being residents of India's West Bengal state.

Arrived to a warm welcome & guard of honor at the Hazrat Shahjalal Int. Airport in Dhaka, #Bangladesh and was received by PM Sheikh Hasina. I’m honored to be a part of the #GoldenJubilee Independence celebrations & look forward to the next two days of festivities & discussions. pic.twitter.com/PHz9J8XnMT