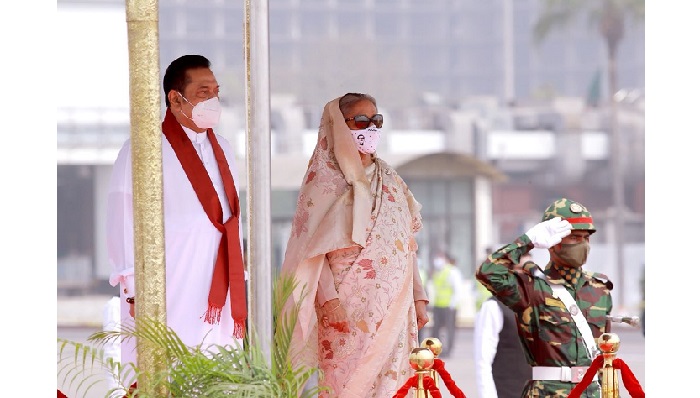 Before heading towards Dhaka, he left a tweeted message expressing his keenness to attend the birth centenary celebration which may pave the way for consolidating relations between two countries and exploiting trade and other opportunities.

He shared a photo while leaving Sri Lanka for Dhaka

In the tweet, Mahinda Rajapaksa says “As I head to #Bangladesh to participate in the celebrations of the #GoldenJubilee year of their #Independence, I look forward to engaging with PM Sheikh Hasina and the Government of Bangladesh to strengthen the bilateral relationship to mutually benefit both our nations.”

After being accorded reception at the airport, Lankan PM expressed his excitement again in another tweet.

“Arrived to a warm welcome & guard of honor at the Hazrat Shahjalal Int. Airport in Dhaka, #Bangladesh and was received by PM Sheikh Hasina. I’m honored to be a part of the #GoldenJubilee Independence celebrations & look forward to the next two days of festivities & discussions,” he said.

He also shared the following photo captured at Dhaka airport-