Can the US and China work together? 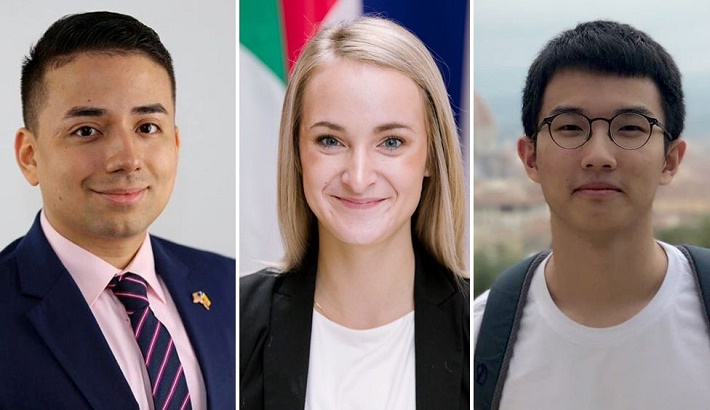 Top diplomats from the US and China will meet in person on Thursday for the first high-level talks between the two countries since President Joe Biden took office.

Beijing is aiming to reset ties after years of tension. Washington says the meeting is a one-off and future engagements depend on "deeds, not words".

The dialogue will help indicate how hard the Biden administration is willing to push China on a range of issues.

We asked young people in the US and in China about the future of US-China relations.

Here's what three Americans and three Chinese nationals told us:

Peyton is a young black progressive who does not view China as a foe and says the two countries should work together on climate change.

The US government 100% considers China to be an adversary at this point. Any country that threatens the US's place as the greatest economic power in the world would be seen as an enemy. Add in the ideological differences, spying [and] hacking allegations, and general AAPI [Asian American and Pacific Islander] discrimination, and I wouldn't be surprised if the majority of Americans feel the same way.

I personally have no strong feelings toward China either way. I don't think the country or any of its citizens have done anything of significance for me to make that determination.

I'd like to see the US and China, along with other nations, commit to decarbonisation and the development of renewable energy standards to address climate change, as well as tackling this pandemic and preparing for any future ones. I'm not too worried about joint trade deals or the global economy because I think other issues are more pressing.

I actually took a Chinese class for five years and was a part of the Confucius Institute at my high school. I admire China's much more sensible gun policies and how most of its government spending is directed toward education [and] social welfare rather than its military.

If the US was as inclined to invest money into its citizens rather than building a [military], the country probably wouldn't lag so far behind in global childhood education rankings.

Jiajun quit his job as product manager of a leading Chinese tech company last year and has enrolled in a computer science graduate program in the US this autumn.

Do you view the US as an adversary or a potential partner?

I think, no matter in the short or long term, America is China's partner. China has imported many technologies from the US. Even though China's home-grown innovation is now on the rise, many leading Chinese tech companies still look up to their American peers in Silicon Valley. For Chinese companies aiming to expand to markets outside China, stable trade and economic ties with the US are of the utmost importance.

Energy and environmental issues. The planet needs to become more sustainable, and the joint efforts of China and America are absolutely essential.

America's political system is very resilient and can correct itself. [Former US President Donald] Trump's four years were like a stress test to America, and it has survived. The recent civil rights movement also shows America is a society that continues to reflect on and improve itself.

On a more personal level, the US offers better work-life balance, while jobs in the Chinese tech industry are extremely stressful and demanding.

Gabrielle, a Republican who voted for Joe Biden in the 2020 election, is extremely wary of the threat China poses to the US and the rest of the world.

I strongly believe that China is our adversary. The United States has no place creating international partnerships or friendships that turn a blind eye to a communist regime that has committed multiple human rights atrocities, broken their independence agreement with Hong Kong, escalated tensions repeatedly in the South China Sea, and covered up and perpetuated a global pandemic for the sake of minimising political fallout.

China does not view the United States with any sort of respect and they should not be given any in return.

While I am immensely sceptical of any future partnership with China, it is in the best interest of both the United States and China to [work on] denuclearisation in certain regions of the world. Nuclear weapons in the hands of the wrong parties are not only a threat to the United States but to the entire world.

The Chinese and Taiwanese people have a tremendous drive for freedom and opportunity, and the world will be better off when they can pursue that end to its fullest potential.

While the government is disgraceful and does not deserve any admiration, the people that live under China's oppressive regime should be respected for their perseverance. The will and determination of the Chinese people is entirely commendable and I look forward to the day they will not have to live under such an inhumane and oppressive regime.

A student and finance intern in Shanghai, Xiao'ou has also studied in the UK, Ireland and France, and says he sees many things in common in the different places he has travelled to.

Do you view the US as an adversary or a potential partner?

Adversary. The negative public opinion both countries hold towards each other has reached a turning point and there's no way back. It's often said that China-US relations are like a marriage. It seems to me that this marriage cannot be saved anymore.

Like a divorced couple who will still take care of their children together, China and the US have shared interests, when it comes to global issues like the pandemic and climate.

Probably not. Shanghai and San Francisco have a lot in common, offering a variety of cultures and goods. As a country, America is probably more multicultural than China and there is less pressure to conform.

Gabriel is very active in New York Young Republican circles and he says neither the Biden administration nor the US media pushes for Chinese accountability as much as they should.

I see the Chinese Communist government as a threat. They're rebuilding their military and creating islands in the South China Sea where they claim they're able to "deploy military assets, including combat aircraft and mobile missile launchers to the Spratly Islands at any time". The Chinese government is also becoming more expansionist with Taiwan and its neighbours. That behaviour is unacceptable.

I believe the US and China should work more on creating an exit strategy with our corporations. It's shameful that American companies exploit the Chinese as a means to produce their products. We need to ensure jobs come back to our workers in this time of economic recovery.

What I admire about China is their ability to get away with their actions. It's astounding, the Biden administration covers for their genocide of the Uighurs and bigotry. So does the majority of American media. They have consistent human rights violations with their forced labour practices, general mistreatment of their population, invasion of privacy with their social credit system, and lied about Covid.

Martin is a Chinese national who has lived in the US for nine years and works as a data engineer in Rhode Island.

Do you view the US as an adversary or potential partner?

I think America is more a potential partner than an adversary to China. I can't speak for all Chinese people, but I personally believe China has learned a great deal from America. My current view is based on the premise that America is not being very hostile to China. If you had asked me during the Trump era, I may have given a different answer.

America and China can work together on humanity's great existential crises, such as climate change. If the two largest countries in terms of energy consumption can work together, it would be crucial for our future. In other aspects where the two countries have significant disagreements, I hope to see co-operation as well, but I don't think it's realistic.

Cultural diversity. I think multiculturalism is America's greatest advantage. It is a melting pot where you can find many cultures from other parts of the world. In comparison, China is more homogenous. But I am concerned that the Trump era has severely damaged the openness of America.