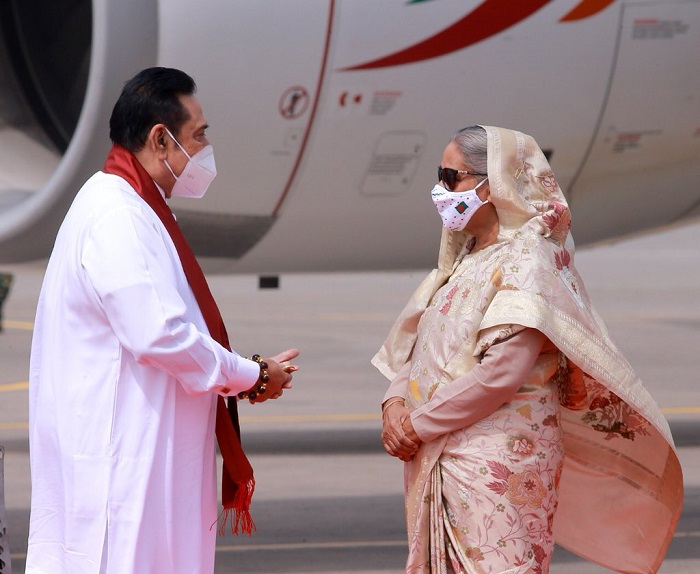 Sri Lankan Prime Minister Mahinda Rajapaksa has arrived in Dhaka this morning to take part in celebration of birth centenary of Father of the Nation Bangabandhu Sheikh Mujibur Rahman and the Golden Jubilee of Bangladesh’s independence.

A chartered flight carrying Sri Lankan Prime Minister and his entourages landed at Hazrat Shahjalal International Airport at 9:50am.

Mahinda Rajapaksa is on a two-day visit to Dhaka and the second head of state to be attending the gala programmes arranged by Bangladesh to celebrate the birth centenary of the country’s founding father.

After arrival, he received guard of honour accorded by a smartly turn-out contingent of the Armed Forces drawn from the three services. National anthems of both countries played. Nineteen-gun salute are heralded in the air to welcome the Sri Lankan Premier.

From the airport, Sri Lankan Prime Minister will go to National Mausoleum at Savar to pay tribute to the martyrs of Bangladesh Liberation war.

He will address the third consecutive day of 10-day programme titled ‘Mujib Chironton’ as guest of honour.

He will visit the Bangabandhu Memorial Museum at Dhanmondi-32 and pay homage to the Father of the Nation Saturday morning.

Prime Minister Mahinda Rajapaksa will hold high-level bilateral meetings with Prime Minister Sheikh Hasina at Ganabhaban and according to Sri Lankan newspaper reports, he is expected to sign a number of agreements in various sectors such as agriculture, technical education, health and cultural cooperation.

He will go to Bangabhaban and make a courtesy call on President Abdul Hamid on Saturday afternoon.

The Sri Lankan Prime Minister will leave Dhaka for Colombo in the evening.