Joint Communiqué on the State Visit of Ibrahim Mohamed Solih, President of the Republic of Maldives to Bangladesh 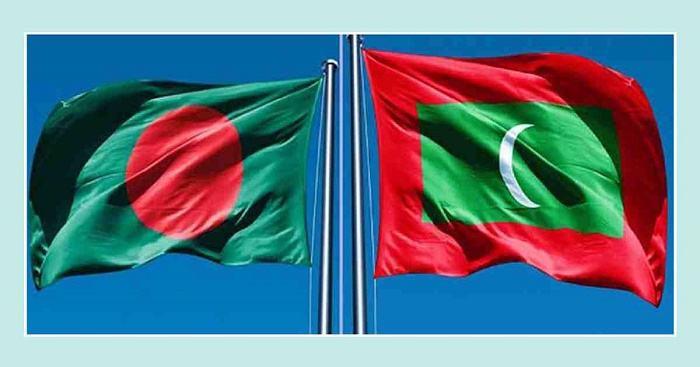 Joint Communiqué on the State Visit of H. E. Mr. Ibrahim Mohamed Solih, Hon’ble President of the Republic of Maldives to Bangladesh

At the invitation of H. E. Mr. Abdul Hamid, President of the People’s Republic of Bangladesh, H. E. Mr. Ibrahim Mohamed Solih, President of the Republic of Maldives made a State Visit to Bangladesh on 17-18 March 2021 to attend the Birth Centenary Celebration of the Father of the Nation Bangabandhu Sheikh Mujibur Rahman and the Golden Jubilee of the Independence of Bangladesh. President Solih was accompanied by First Lady H. E. Ms. Fazna Ahmed and a high level delegation, including Foreign Minister, Minister for Economic Development, Chief of Staff at the President’s Office, Foreign Secretary, as well as senior officials of the Maldivian Government.

President Solih was accorded a ceremonial welcome of honour on arrival at the Hazrat Shahjalal International Airport, Dhaka. He paid tribute and laid floral wreaths at the National Martyrs’ Memorial at Savar and also at the portrait of the Father of the Nation at the Bangabandhu Memorial Museum at Dhanmondi in Dhaka in the early hours of 17 March 2021. Bangladesh Foreign Minister Dr. A. K. Abdul Momen, MP paid a welcome call on President Solih.

President Solih attended the official ceremony held on 17 March 2021 to mark the Birth Centenary of the Father of the Nation and the Golden Jubilee of the Independence of Bangladesh—as the special Guest of Honour. He expressed felicitations to President Abdul Hamid, Prime Minister Sheikh Hasina and the people of Bangladesh on the twin festive celebrations.

President Solih and Prime Minister Sheikh Hasina held a bilateral meeting on 18 March 2021 in a cordial atmosphere, reflective of the warmth of the relations between the two brotherly countries. They reviewed the entire spectrum of bilateral relations, discussed ways of further strengthening the cooperation, and exchanged views on regional and international issues of mutual interest. The two leaders gave directives to their respective officials to carry forward the impetus generated during the visit, towards further exploring the untapped opportunities in potential sectors of collaboration.

Prime Minister Sheikh Hasina stated that President Solih’s gracious presence in the celebrations of the ‘Mujib Year’ and the Golden Jubilee of the Independence of Bangladesh testifies to the special priority the two countries attach to their relationship, which draws strength from the commonalities in faith, culture, values and the long-standing trust and confidence in each other.

Prime Minister Sheikh Hasina congratulated President Solih on the outstanding progress achieved under his leadership in promoting sustainable economic growth in the Maldives, and applauded his holistic plans to reshape the economic landscape of the “Large Ocean State”—with particular thrust on inter-island connectivity, green tourism, climate-smart infrastructure and transition to renewable energy. In turn, President Solih commended Prime Minister Sheikh Hasina’s visionary leadership and phenomenal success in the forward march towards transforming Bangladesh into a developed country in the foreseeable future.

The two leaders noted the growing economic and social cooperation between the Maldives and Bangladesh, and agreed on the need to pay a particular focus on economic cooperation through trade and investment initiatives, as well as on creating an enabling environment for the private sector cooperation in the fields of agriculture, tourism, fisheries, healthcare and pharmaceuticals, among other areas.

The two leaders noted that the newly established Joint Commission led by the two Foreign Ministers and the Bilateral Foreign Office Consultations (FOC) would act as a coherent framework towards revitalizing the existing relations and extending cooperation to prospective new areas.

The two leaders stressed the need to harness bilateral trade potential to its fullest measure and noted the absence of a formal trade agreement between Bangladesh and the Maldives. In this respect, Prime Minister Sheikh Hasina expressed Bangladesh’s interest to enter into a Preferential Trade Agreement (PTA) with the Maldives, within the purview of the WTO provisions. The Maldives side welcomed the proposal and agreed to give positive consideration to the text of the draft PTA shared by Bangladesh.

The two sides agreed to expedite the finalization of the proposed Agreement on Customs Cooperation and the signing of the Agreement on Avoidance of Double Taxation.

The two leaders underscored the need to have robust maritime and air connectivity between Bangladesh and the Maldives. They decided to establish a direct commercial shipping link between Malé and the three Sea Ports of Bangladesh, and instructed their respective officials to work out a Shipping Agreement at the earliest.

Prime Minister Sheikh Hasina reiterated her Government’s policy of extending continued support towards development of human resources in the Maldives in a variety of fields, including vocational training and scholarships. She suggested a new MoU on Education and Human Resources Development to facilitate such collaboration, since the MoU on Cooperation in Education, earlier signed in 2011, had already expired.

Youth development being a key priority of the Government of Maldives, President Solih welcomed the support of Bangladesh in this area. Both leaders agreed to have exchange of youth, sports and training programmes in various sectors to foster closer ties.

The two leaders exchanged views on combating the Covid-19 pandemic in the region and discussed their respective efforts towards ensuring an effective and efficient response at both national and regional level. They stressed the imperative to treat the vaccine as a ‘global public good.’

President Solih called for enhanced bilateral collaboration in the healthcare industry and requested more opportunities for Maldivian students in the higher study of medicine and dentistry in Bangladesh. He also proposed to consider recruitment of Bangladeshi doctors and nurses in the Maldives to strengthen the capacity of the health sector and sought support in the import of pharmaceutical items from Bangladesh. Prime Minister Sheikh Hasina assured him of necessary support in this regard and stated that Bangladesh would be happy to welcome a delegation from the Maldives led by Health Minister.

The two sides agreed to enhance cultural cooperation, so as to benefit from closer people-to-people contacts.

The two leaders agreed to join hands in various multilateral platforms—including in the UN systems and the Climate Vulnerable Forum (CVF)—to address the grave risks posed by the climate emergency, and also to continue to remind the international community of their moral obligations to the planet. Prime Minister Sheikh Hasina further offered to share Bangladesh’s disaster management expertise with the Maldives.

President Solih reiterated Maldives’ support to Bangladesh on the issue of Myanmar nationals massacred and forcibly displaced from Rakhine State, and applauded Prime Minister Sheikh Hasina’s generous efforts in taking care of more than 1.1 million Rohingya people. He stated that the Maldives had always advocated for their inalienable civic rights, and that his country—shoulder to shoulder with Bangladesh and the international community—would continue to give voice to the global conscience to bring the Myanmar military to justice for their heinous crimes against humanity in the forms of systemic ethnic cleansing, brutal oppression and the State-sponsored genocide they perpetrated against Rohingya Muslims.

The following instruments between Bangladesh and the Maldives were signed after the bilateral meeting:

President Ibrahim Mohamed Solih thanked the Government and the people of Bangladesh for the very special honour and the warm hospitality accorded to him and his delegation. He extended a cordial invitation to President Abdul Hamid and Prime Minister Sheikh Hasina to undertake visits to Maldives at mutual convenience.