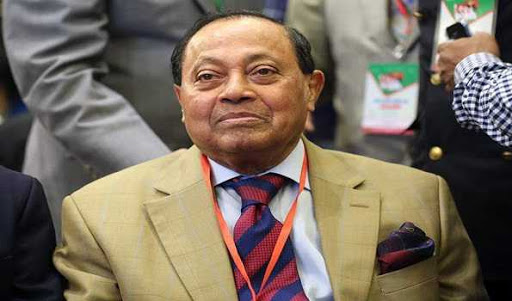 He said the body of Moudud Ahmed will be taken first his residence at Gulshan in the capital. Later, the body will be taken to United Hospital and it will remain at the mortuary of the hospital on Thursday night.

BNP Secretary Genera Mirza Fakhrul Islam Alamgir along with party senior leaders is scheduled to receive the body at the airport on completion of the necessary formalities.

Talking to reporters at the airport, Fakhrul said Moudud’s body will be kept at the Central Shaheed Minar at 9:00am on Friday enabling people to pay their last respect to the seasoned politician.

The second janza will be held in front of BNP's Nayapaltan central office after party leaders and activists pay homage to the deceased at 11am.

Later, Moudud's body will be taken to Kabirhat upazila in Noakhali where his third janza will be held in Kabirhat Degree College field at 2:30pm.

Later, Moudud's body will be taken to his village home in Companiganj upazila of the district.

He will be buried at his family graveyard 5:30pm after his last Jazana at Bashurhat Government Mujib College at 4pm.

Meanwhile, BNP observed today (Thursday) as a mourning day over the death of its senior leader Moudud.

BNP hoisted the black flag at party offices across the country and kept the party flag at half-mast while party leaders and activists wore black badges in observance of the mourning day.

Moudud Ahmed is one of the founding members of BNP. He joined Jatiya Party in 1985 and served as prime minister and vice president in military ruler HM Ershad's government.

After the fall of Ershad, Moudud returned to BNP in 1996 and was made law minister in Khaleda Zia's government in 2001.

He also served as the first post master general of Bangladesh after independence.

Moudud was elected MP five times from Noakhali-5 seat and once from the Bogura-6 constituency.