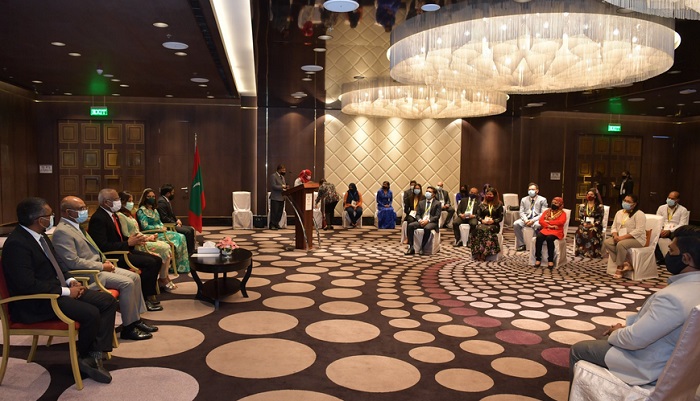 Maldives President Ibrahim Mohamed Solih has met his country’s community at InterContinental Dhaka on the last day of tight visit to Bangladesh.

Finishing a bilateral meeting with Prime Minister Sheikh Hasina at the latter’s office at noon, Solih made it to the hotel to meet the community people and exchange view with them.

Ibrahim Mohamed Solih accompanied by wife and ministers and high officials arrived in Dhaka on Wednesday. From the airport, he went to National Mausoleum in Savar and paid tribute to Bangladesh liberation war heroes.

Later, he paid tributes to Father of the Nation Bangabandhu Sheikh Mujibur Rahman, by placing wreath at his portrait.

In the evening, he attended the inauguration of 10-day programme commemorating birth centenary of Bangabandhu as guest of honour.

Solih is at the fag-end of Bangladesh visit.

He will attend a banquet to be hosted by President Abdul Hamid at the latter’s official residence Bangabhaban.