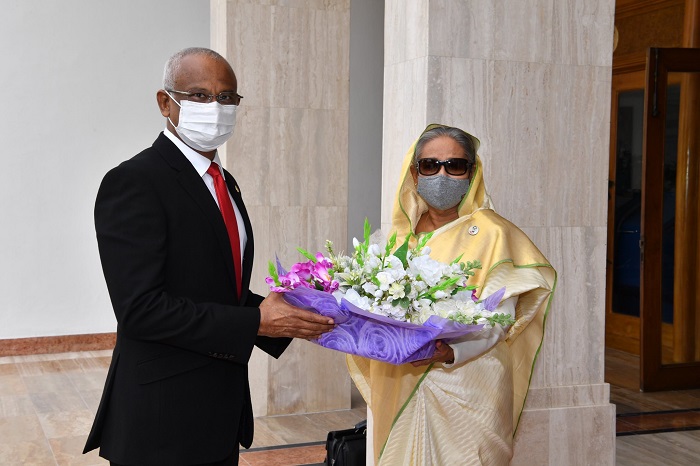 Bangladesh and Maldives signed MoUs on--

*Cooperation in the Field of Fisheries and Pelagic Fishing

Solih is the first head of state to have attended the inaugural ceremony of 10-day national programme commemorating birth centenary of architect of Bangladesh’s independence and Father of the Nation Bangabandhu Sheikh Mujibur Rahman.

Formal talks were preceded by a tête-à-tête between two leaders for some time. Both sides inked four deals.

MoU on Joint Commission for Comprehensive Cooperation (JCC) between two foreign ministers, MoU on Bilateral Foreign Office Consultations (FOC) between two foreign secretaries, MoU on Cooperation in the Field of Fisheries and Pelagic Fishing between Bangladesh minister for fisheries and livestock and Maldivian minister of economic development, and MoU on Cultural Exchange Programme (CEP) between Bangladesh minister for cultural affairs and Maldivian foreign minister have been signed.

After meeting, Solih will make it to InterContinental Dhaka to meet Maldivian community in Bangladesh.

He will attend a banquet to be hosted by President Abdul Hamid at the latter’s official residence Bangabhaban.

Sri Lankan Prime Minister Mahinda Rajapaksa is the second head of state to be attending the birth centenary celebration.

Gradually, three other heads of states including Indian Prime Minister Narendra Modi will come in phases to attend the programme.