Boris Johnson to visit India in April as UK aims to counter China:Report 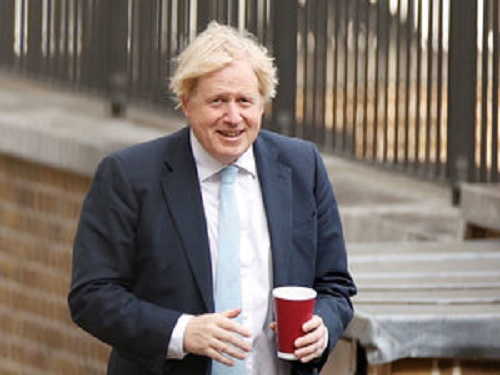 Prime Minister Boris Jhonson will visit India in April to boost UK opportunities in the region and to create a democratic counterweight to China, Reuters reported.

With an aim to expand its influence in the Indo-Pacific region while preserving its strong ties with the United States, the British government will be laying out the country's post-Brexit defence and foreign policy priorities on Tuesday.

Calling the Indo-Pacific "increasingly the geopolitical centre of the world", the government also highlighted a British aircraft deployment to the region ahead of Prime Minister Boris Johnson's previously postponed visit to India in April, reported Reuters.

UK Prime Minister Boris Johnson was supposed to be the chief guest at Republic Day, but due to the surge in COVID-19 cases in the UK and the spread of a new strain, he cancelled his visit. Johnson is scheduled to visit India in April.

Relations between the United Kingdom and China have strained over issues such as Hong Kong, COVID-19 pandemic and also denying Huawei an active role in Britain's 5G network.

The potential deployment of Queen Elizabeth aircraft carrier's is also expected to raise military tensions in the South China Sea.

The report in Reuters also mentioned that Johnson will focus "on the UK's place in the world and the ability to seize the opportunities ahead."

Britain will also be holding two influential roles this year: hosting the first post-pandemic G7 summit in June, and the COP26 climate conference in November.

Since completing its exit from the European Union at the end of last year after an acrimonious divorce, Johnson's government has vowed the "Integrated Review" will show Britain still had clout on the world stage and define a new era for the country.

The 100-page document will be closely scrutinised for concrete measures showing how the government will deliver on Johnson's rhetoric at a time when the country is struggling to come to terms with the realities of Brexit and has suffered more deaths than its peers from the COVID-19 pandemic, Reuters reported.

A statement previewing Tuesday's report listed "the importance of UK relationship with the US" alongside the defence of democracy and human rights, and safety from terrorism as fundamental components of the British policy.

Britain is seeking a trade deal with the United States and reassurance over where it sits in President Joe Biden's international priorities.

China approves another Covid-19 vaccine for emergency use

China has approved a new Covid-19 vaccine vaccine for emergency use, one that was developed by the head of its Centre for Disease Control, adding a fifth shot to its arsenal.

Gao Fu, the head of China's CDC, led the development of a protein subunit vaccine that was approved by regulators last week for emergency use, the Chinese Academy of Sciences' Institute of Microbiology said in a statement on Monday.

It is the fifth Covid-19 vaccine approved in China and the fourth to be given emergency use approval. Three of those given emergency approval have since been approved for general use. All were developed by Chinese companies.

The latest vaccine was developed jointly by Anhui Zhifei Longcom Biopharmaceutical Co. Ltd. and the Chinese Academy of Sciences. The team finished phase 1 and phase 2 clinical trials in October and is currently conducting the last phase of trials in Uzbekistan, Pakistan and Indonesia, according to the statement.

The vaccine was approved for use in Uzbekistan on March 1. It's a three-dose shot that is spaced out with one month each between shots, a company spokesperson said. Like other vaccines China has developed so far, it can be stored at normal refrigeration temperatures.

There is no publicly available information in peer-reviewed scientific journals about the clinical trial data showing efficacy or safety. A spokesperson for the company said that the data could not be shared at this time but that the company was providing the information to health authorities.

The protein subunit vaccine is similar to many of the other vaccines that have been approved globally in that it trains the body to recognize the spike protein that covers the surface of the coronavirus vaccine, although the difference lies in how it tells the body to recognize the protein. Scientists grow a harmless version of the protein in cells and then purify it, before it is assembled into a vaccine and injected.

China has been slow in vaccinating its population of 1.4 billion people, despite having four vaccines approved for general use. The latest numbers, according to government officials at a press briefing Monday in Beijing, is that it has administered 64.98 million doses of vaccines.

China has targeted what it considers key populations for vaccination thus far, namely health care workers, those who work at the border or customs, and specific industries the government has selected. Other groups that have been notably absent thus far in comparison to many other countries are the elderly and those with pre-existing conditions.

The approved vaccines have previously been limited to adults 18-59 years old, as officials cited a lack of clinical trial data for those who are older, although the government appears to be signaling the limits are now being set aside.

"We will promptly carry out mass vaccination of relevant populations," Li Bin, a vice chair on the National Health Commission, said Monday. China's official Xinhua News Agency reported over the weekend that in certain neighborhoods in Beijing, local health centers started to offer the vaccines to those aged 60 and older.