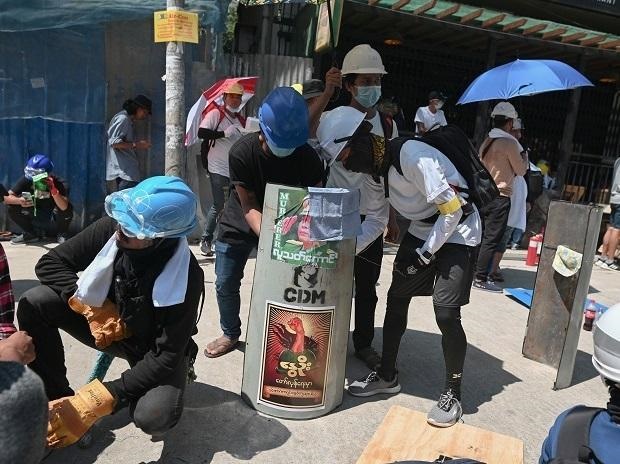 Myanmar authorities declared martial law in parts of Yangon after several Chinese-owned garment factories were torched on Sunday over Beijing being supportive of the military for the coup thereby threatening the country's fragile economy.

At least 38 people were killed on Sunday as security forces in Myanmar opened fire on anti-coup protesters in their continued attempts to crush demonstrations calling for the reinstatement of the elected government.

The Chinese Embassy in Yangon condemned the attacks as 'extremely vile' and urged Myanmar authorities to cease the violence, punish perpetrators and protect Chinese businesses and people in the country.

According to the Embassy, several Chinese-backed factories were smashed up and set ablaze, while many Chinese nationals were injured.

"We urge the Myanmar people to express their demands in a lawful manner, and avoid being incited and exploited into damaging friendly cooperation between China and Myanmar," the Embassy said, adding that Chinese investment in the textile and garment sector has created nearly 400,000 jobs in Myanmar.

Many opponents of the coup have slammed China for its refusal to condemn the takeover or violence against protesters in Myanmar, viewing Beijing as supportive of the military, reported WSJ.

China's response to the hostile takeover has stood in contrast to that of other democratic countries, describing it as an 'internal matter' of Myanmar. Beijing's foreign ministry said that any action by the international community should 'avoid aggravating conflicts and further complicating the situation'.

Some people in Myanmar have also questioned China's relationship with the junta and its silence over human rights abuses. Social media users have shared lists of companies said to be Chinese-owned calling for boycotts.

One widely shared image shows the words "China get out from Burma" over the Chinese flag, according to WSJ.

In several interviews, residents of the affected Yangon suburbs have said that they are increasingly frustrated with Beijing.

Mon Sandar Myint, chairperson of the Federation of General Workers Myanmar, said many of the garment workers her group represents have been threatened by Chinese employers over their participation in protests and civil disobedience.

She further said that the Chinese Embassy's statement belied Beijing's antagonism towards the demonstrators, and did not show any sympathy for the Myanmar nationals who were killed.

Large numbers of protesters have taken to the streets of Myanmar since the military seized power in the February 1 coup, ousting the elected government of Aung San Suu Kyi, despite the increasingly deadly posture taken by security forces to quell the wave of protests.

China and Russia continue to defend Myanmar's military, insisting that the armed forces' seizure of power from the democratically-elected government in Myanmar's internal affair, the Irrawaddy reported earlier.