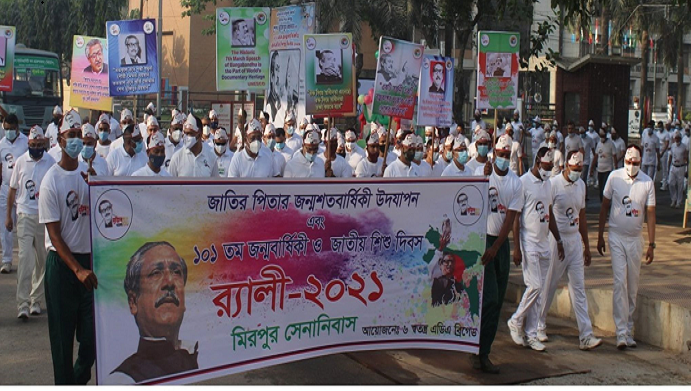 Bangladesh Army celebrated 101st birth anniversary of Father of the Nation Bangabandhu Sheikh Mujibur Rahman and the National Children’s Day-2021 with due dignity and enthusiasm in all the cantonments of the country including Dhaka on Wednesday.

The program of the day was started with 101 Artillery fired in the old airport area of Dhaka under the supervision of the army.

Inter-Service Guard of Honour was given to the President and the Prime Minister during the wreath-laying ceremony at the Tomb of the Father of the Nation at Tungipara on Wednesday.

In celebration of the birth anniversary of the Father of the Nation, various ceremonies were organized in all the cantonments with the participation of military and civilian personnel of all levels of the army.

Every entrance and other important installations of all the cantonments including Dhaka were decorated on the occasion of the day.

Colorful rallies were organized in all the cantonments highlighting the life style of Father of the Nation Bangabandhu Sheikh Mujibur Rahman, his role in the great liberation war, his political contribution to the formation of the country and various developmental figures.

Discussions and documentaries on the biography of Father of the Nation Bangabandhu Sheikh Mujibur Rahman were shown in all units, institutions and headquarters of the army.

In addition, online discussion programs, quizzes, essays, debates and drawing competitions, poetry recitations, etc. are organized in all schools, colleges and universities run by the Army.

Milad mahfil and special prayers were organized in all the mosques of the cantonments on this day seeking the forgiveness of the departed soul of the father of the nation.

A grand rally was organized under the management of headquarter 6 Independent Ada Brigade in Mirpur Cantonment on Wednesday with due enthusiasm on the occasion of the 101st birth anniversary of Bangabandhu Sheikh Mujibur Rahman and to celebration of National Children's Day-2021.

In addition, senior officers, officers, JCOs and soldiers of other ranks working in Mirpur Cantonment spontaneously participated in the rally.