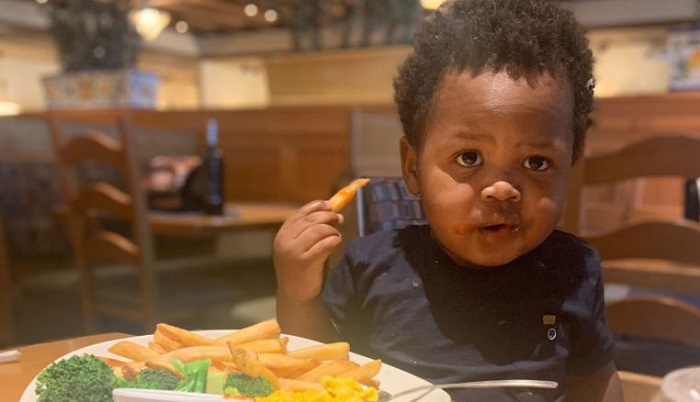 A 1-year-old boy is "fighting for his life" and struggling to breathe on his own after being shot in the head by Houston police, the baby's mother and attorneys representing her said Tuesday.

The shooting took place March 3 when Daisha Smalls was pumping gas and she saw police cars and heard sirens, she said in a news conference Tuesday. Her son, Legend, was in the back seat of the vehicle. Smalls said a man then got into her vehicle and told her to give him the car.

"I wouldn't give him my car because I let him know that I have a child in my car and that I would not leave my car without my son," Smalls said through tears. Smalls said she was sitting in the car when the man jumped in and police were right behind them.

"Before I knew what happened they were already shooting at my car and I was just scared for my son's life," Smalls said.

Houston police had a different telling of events, according to a March 4 statement from Executive Assistant Police Chief Troy Finner. Smalls was not in the car when shooting took place, Finner said.

The 30-year-old man in question was a suspect in two aggravated robberies who was already being chased by police when he jumped out of a car he crashed during the chase. The suspect -- who was armed with a gun -- then entered Smalls' car.

The man refused to drop the weapon, officers fired several shots at him and he died at the scene. The baby boy was also shot, Finner said.

"Fearing for the mother's safety, one of our officers discharged his duty weapon, fatally striking the suspect," Houston Police Chief Art Acevedo said in a statement. "Sadly, baby Legend was also struck. Officers at the scene immediately rendered first aid to Legend."

Finner said he was not sure whether officers at the scene knew the baby was in the car.

The officer who fired the shot that hit the baby is a 15-year veteran of HPD and is "deeply concerned" about the baby and his mother. He has been placed on administrative duty while the investigation continues, Finner said.

Acevedo said in his statement he and Finner went to the hospital to check on Legend and his mother.
"We are hoping and praying for the full and speedy recovery of little one-year-old Legend Smalls," Acevedo said.

Smalls' attorney Ben Crump said Legend has been on a ventilator for 10 days. Smalls said the bullet was removed from her son's head along with the right side of his skull, but he still has bullet fragments in his head.

Legend has also had more than 10 seizures, Crump said.

"Why would they shoot knowing she was in the car? Not knowing who else was in the car. There could have been children, there could've been others in the car, but they shot," Crump said. "Regrettably and tragically, little Legend will live the rest of his life with the consequences of their decision to shoot into his mama's car even though they knew she was in there."

Attorney Antonio Romanucci, who is also representing Smalls, said, "The objectiveness is that there are innocent people in the line of fire, and we know that you do not shoot unless you know what your target is."
CNN has reached out to the Houston mayor's office for comment.