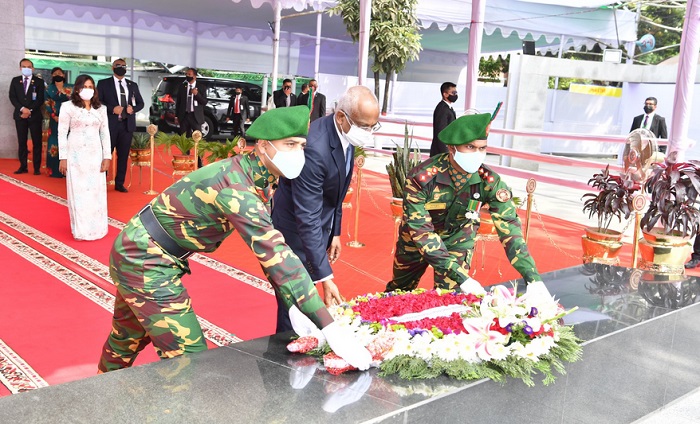 He visited Bangabandhu Memorial Museum at Dhanmondi 32 and placed a wreath at the portrait of Bangabandhu. He also signed visitors' book kept there after paying homage. Bangabandhu’s younger daughter and Prime Minister Sheikh Hasina’s sister Sheikh Rehana was also present there.

Earlier, Solih went to the National Mausoleum in Savar and paid tribute to the martyrs of the Liberation War. From Savar, he moved to Bangabandhu Memorial Museum at Dhanmondi and placed a wreath at the portrait of the founding father of Bangladesh.

In the afternoon, he and Abdul Hamid will join the inaugural event of the celebrations at the National Parade Ground. The programme will be addressed by the two Presidents while recorded messages of three foreign dignitaries will be played with Prime Minister Sheikh Hasina in the chair.