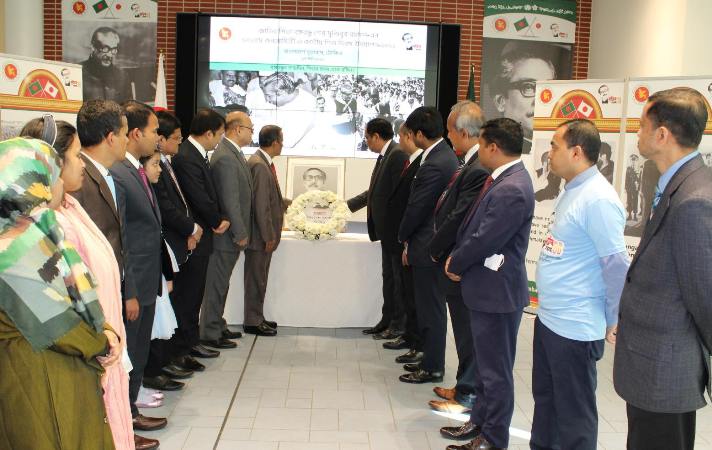 The Embassy of Bangladesh in Tokyo observed the 101st Birth Anniversary of the Father of the Nation Bangabandhu Sheikh Mujibur Rahman and National Children’s Day 2021 in a befitting manner with solemnity.

The day’s programme was inaugurated by placing of floral wreath at the portrait of the Father of the Nation located at the embassy premises in the early morning in which all the embassy officials took part.

Later the Ambassador hoisted the national flag along with the rendition of the national anthem in presence of embassy officials.

This was followed by observance of 01 (one) minute silence in remembrance of the Father of the Nation, his family members and to the memories of the martyrs who sacrificed their lives in the journey of independence.

Following the pandemic guidelines, the program resumed indoors with offering special prayer (munajat) for the salvation of the souls of the Father of the Nation, his family members and for the prosperity of the country.

Prayer was also offered for the peace and prosperity of the country along with the wellbeing of the expatriate Bangladesh Community.

The theme song of the ‘Mujib Year’ was played virtually followed by reading out the messages issued by President, Prime Minister, Foreign Minister and State Minister for Foreign Affairs marking the day.

In his remarks Ambassador Ahmed paid homage to the Father of the Nation Bangabandhu Sheikh Mujibur Rahman and explained the significance of the 17th March and shed light on his life and achievement.

He said Bangabandhu is universal with a lion-heart full of kindness and love for mass people. The Ambassador urges upon all irrespective of age and gender to learn from the ideology and life of Bangabandhu.

Ms. Radia and Ms. Raina spoke on the occasion as children’s representatives followed by open discussion participated by expatriate Bangladeshis living in Japan. Later recorded cultural program performed by children of Bangladeshi community was screened followed by a video documentary on the life and struggle of the Father of the Nation Bangabandhu Sheikh Mujibur Rahman.