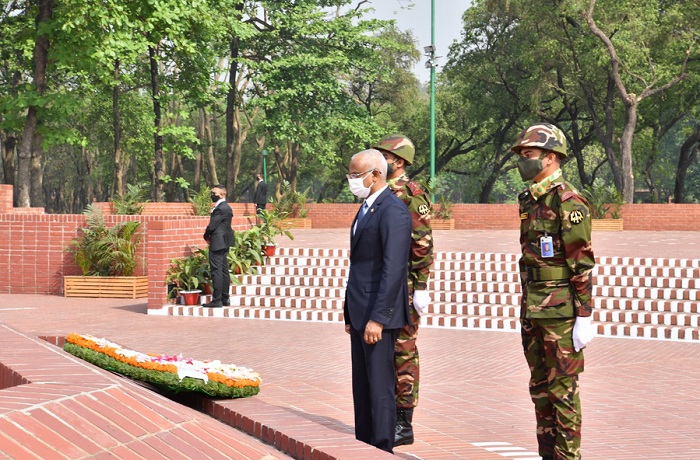 Maldives President Ibrahim Mohamed Solih has paid rich tributes to the martyrs of the Liberation War by placing wreaths at the National Memorial in Savar.

He arrived in Dhaka to join celebration of golden jubilee of Bangladesh’s independence and the birth centenary of Father of the Nation Bangabandhu Sheikh Mujibur Rahman.

He landed at Hazrat Shahjalal International Airport at 8:20am today (Wednesday) on a two-day official visit as the first South Asian leaders to attend the celebrations.

On his arrival, President Abdul Hamid has received him at the airport.

He received guard of honour accorded by a smartly turn-out contingent of the Armed Forces drawn from the three services. Twenty-one gun salutes heralded on the air. First Lady Fazna Ahmed accompanies him.

After completion of formalities at the airport, he moved to Savar for paying tribute to liberation war heroes.

He will leave Savar for Dhanmondi 32 for paying homage to Father of the Nation Bangabandhu Sheikh Mujibur Rahman.

Solih will place a wreath at the portrait of Bangabandhu in front of the Bangabandhu Memorial Museum at Dhanmondi 32 in capital.

Bangladesh has chalked out 10-day special programme to celebrate the golden jubilee of independence and the birth centenary of Father of the Nation Bangabandhu Sheikh Mujibur Rahman beginning on Wednesday.

Maldives President is the first foreign dignitary to have arrived to join the celebrations which are set to begin at the National Parade Ground in the capital in the afternoon.