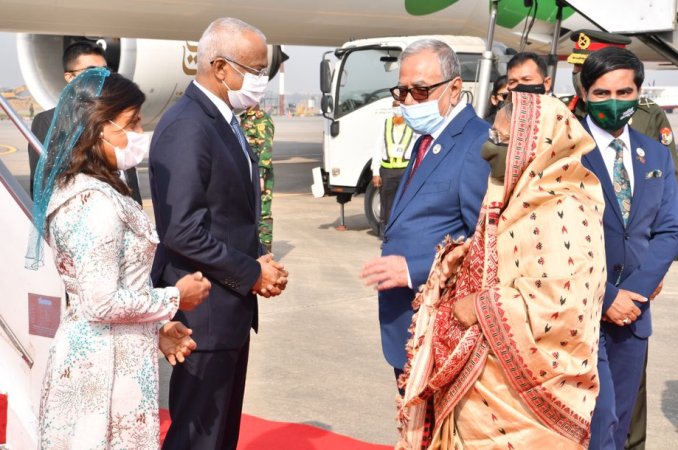 Maldives President Ibrahim Mohamed Solih has arrived in Dhaka to join celebration of golden jubilee of Bangladesh’s independence and the birth centenary of Father of the Nation Bangabandhu Sheikh Mujibur Rahman.

He landed at Hazrat Shahjalal International Airport at 8:25am today (Wednesday) on a two-day official visit as the first South Asian leaders to attend the celebrations.

Bangladesh Foreign Minister, State Minister for Foreign Affairs, Law Minister and Maldives high commissioner in Dhaka are present at the airport to receive the president.

The Maldives President has received guard of honour accorded by a smartly turn-out contingent of the Armed Forces drawn from the three services. Twenty-one gun salutes are heralded on the air. First Lady Fazna Ahmed accompanies the Maldives President.

Bangladesh has chalked out 10-day special programme to celebrate the golden jubilee of independence and the birth centenary of Father of the Nation Bangabandhu Sheikh Mujibur Rahman beginning today.

Maldives President is the first foreign dignitary to have arrived to join the celebrations which are set to begin at the National Parade Ground in the capital in the afternoon.

He will join the inaugural event of the celebrations along with President Md Abdul Hamid. Prime Minister Sheikh Hasina will preside over the opening ceremony.

After the airport ceremony is over, President Solih went to the National Mausoleum in Savar and paid tribute to the martyrs of the Liberation War. From Savar, he moved to Bangabandhu Memorial Museum at Dhanmondi and placed a wreath at the portrait of Bangabandhu.

In the afternoon, he and Abdul Hamid will join the inaugural event of the celebrations at the National Parade Ground. The programme will be addressed by the two Presidents while recorded messages of three foreign dignitaries will be played with Prime Minister Sheikh Hasina in the chair.

After the Maldives President, Sri Lankan Prime Minister Mahinda Rajapaksa will arrive in Dhaka on a two-day visit from March 19. He will lead a 28-member high-level delegation, including Sri Lankan education minister, state minister for regional cooperation, state minister for textile, rural housing and house building.

Nepalese President Bidya Devi Bhandari will arrive in Dhaka on a two-day official visit starting from March 22. Nepalese Foreign Minister Pradeep Gyawali and other high government officials will accompany her.

Bhutanese Prime Minister Lotay Tshering will arrive in Dhaka on a two-day visit on March 24.

Most important dignitary Indian Prime Minister Narendra Modi will arrive in Dhaka on March 26 on a two-day high-profile visit to attend the celebrations.