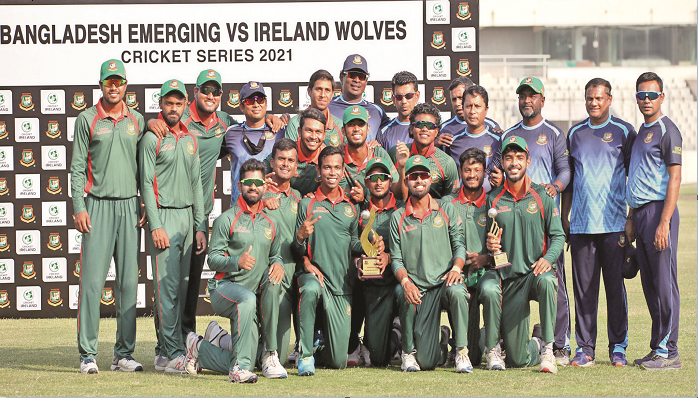 Hridoy struck 58 off 35 balls while Saif made 48 off 36 balls as Bangladesh team scored 184-7 in their stipulated 20 overs after being asked to bat first.

Sumon maintained his form from the one-day series as he claimed 4-28 in 3.1 overs while spinner duo Tanvir Islam and Aminul Islam bagged two wickets each to bowl out the visitors for 154 runs in 18.1 overs to take the series.

Bangladesh team won both the preceding four-day and one-day series against Ireland Wolves. The visitors will leave today for Ireland with empty hands.

“Actually I always try to improve and for that, I keep doing work. Coaches are here to help. I try to learn something new every day and continue the same process,” Sumon said after the game.

The 21-year old, who picked seven wickets including 4-31 in the fifth one-day on March 14 at the same venue, said he was ecstatic to be part of the Emerging team in the series and he believed such series would help the players to prepare better for international cricket in future.

“This is actually a great platform for the players to rise. For the national team or any other top-level, this platform is really very important,” he added.

Apart from handy knocks from Saif and Hridoy, Yasir Ali and Shamim Hossain Patwari made 22 and 28 runs respectively in Bangladesh innings. Peter Chase took two wickets for the visitors.

In reply, apart from a 45-run stand for the second wicket between Stephen Doheny (29) and Harry Tector (22), Ireland Wolves could not form decent partnerships that forced them to get all-out with 11 balls to spare.
Lorcan Tucker made the highest 38 runs for Wolves.

Bangladesh team skipper Saif, who was named man of the match, was optimistic that they would get more series like this one in future.

“There is a difference between the domestic and international level.  But the more we play the better we get the experience. If we play many matches then we can obtain more confidence,” said Saif.