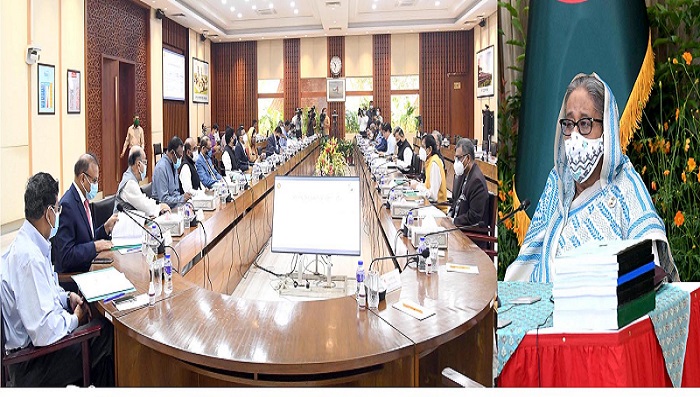 The government  approved on Tuesday a Taka 4,123 crore project for constructing 30,000 homes for insolvent valiant freedom fighters and family members of the martyred and deceased war heroes in a bid to uplift their socioeconomic condition.

The approval came from a meeting of the Executive Committee of the National Economic Council (ECNEC) today with its chairperson and Prime Minister Sheikh Hasina in the chair.

The premier chaired the meeting from her official Ganobhaban residence while ministers, state ministers and secretaries concerned joined it from the NEC Conference Room in the city’s Sher-e-Bangla Nagar area.

Of the approved six projects, three are new while three others are revised projects.

“Of the total project cost, Taka 5,519.87 crore will come from the government of Bangladesh, Taka 42.07 crore from the concerned organization’s own fund while the rest Taka 57.52 crore as project assistance,” he added.

According to the Planning Commission, the Ministry of Liberation War Affairs alongside the concerned Deputy Commissioner (DC) offices and the UNO offices will implement the project.

With the title “Bir Nibash”, the homes will be constructed in 64 districts of eight divisions including in upazilas and cities as a gift from Prime Minister Sheikh Hasina on the occasion of the birth centenary of Father of the Nation Bangabandhu Sheikh Mujibur Rahman and the golden jubilee of the country’s independence.

Once implemented, the project will help uplift the social status and improve economic condition of the insolvent freedom fighters, Birangonas, and widows and children of the martyred and late freedom fighters.

Answering to a question, Planning Commission member Mamun Al Rashid said that the government earlier had planned to build homes for 14,000 valiant freedom fighters in distress under a proposal.

But, now it has decided to construct homes for 30,000 insolvent war heroes under the project, he added.

Mamun informed that Prime Minister Sheikh Hasina in the meeting has asked the authorities concerned to start the operations of this project within this fiscal year (FY21) so that the overall allocations against this project could be disbursed in four fiscal years as it is now scheduled for completion in October 2023.

Asked about the directives from the premier, Planning Secretary Jainul Bari said that the premier once again asked the concerned officials for completing development projects within the stipulated timeframe maintaining due quality of works.

Referring to the 2nd revision of Construction of new 132/33KV and 33/11 KV substation under DPDC project with an additional cost of Taka 92.25 crore, Planning Commission member Sharifa Khan said that the timeframe and cost of the project has been further extended since the scope of work has increased alongside changes in the route.