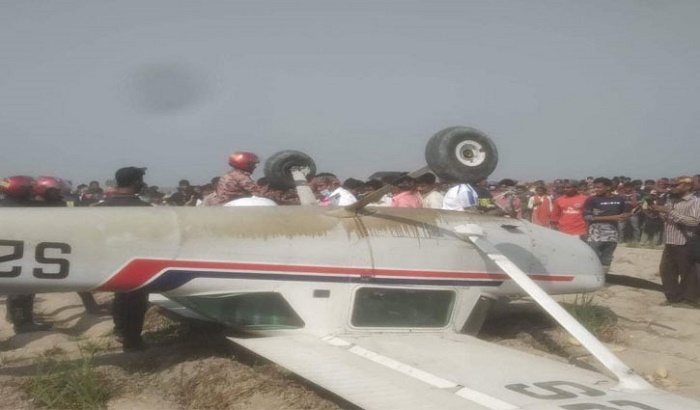 A training aircraft of Bangladesh Flying Club made an emergency landing at a potato field in Tanore upazila of Rajshahi on Tuesday.

However, pilot Capt Mahfuzur Rahman and trainee Nahid Ershad on the plane survived. They did not receive much injury. They were taken to Tanore Upazila Health Complex and given first aid.

Witnesses said the S2-AGG (Cessna 152) model training plane crashed during an emergency landing around 2:30pm on Tuesday due to a mechanical fault.

On information, Tanore Fire service and police conducted a rescue operation. The plane turned completely upside down and dashed against the ground.

Lots of people crowded into the village to see the plane crash. Sources said Bangladesh Flying Club operates training activities using Shah Makhdum Airport in Rajshahi. The plane took off from this airport on Tuesday afternoon. Then it went to Tanore and fell on the potato field at Lalpur area of Taland union in Tanore upazila of Rajshahi.

Abul Kashem, chairman of Tanore’s Taland Union Parishad, said “We had informed the police and firefighters of the accident. The pilot and occupant were slightly injured. I am at the scene with them.They have survived due to the skill of the pilot. The plane was not damaged. Attempts are being made to rescue it.”

Trainee Nahid Ershad said “The accident took place due to engine failure. The engine oil temperature was rising. We had nothing to do. We were not getting the engine. Even then we managed to land safely. We are ok. The aircraft was damaged. However, the engine did not catch fire.”

Earlier, on January 9, a training plane of Bangladesh Flying Club crashed while landing at Shah Makhdum Airport in Rajshahi. The wheel of the plane broke. However, no casualties were reported. On April 1, 2015, a plane of this company crashed at Shah Makhdum Airport in Rajshahi. The female trainee Tamanna Ferdous, 22, died instantly when the plane caught fire. The seriously injured trainer Lt Col (retd) Sayeed Kamal later died while undergoing treatment in Singapore.