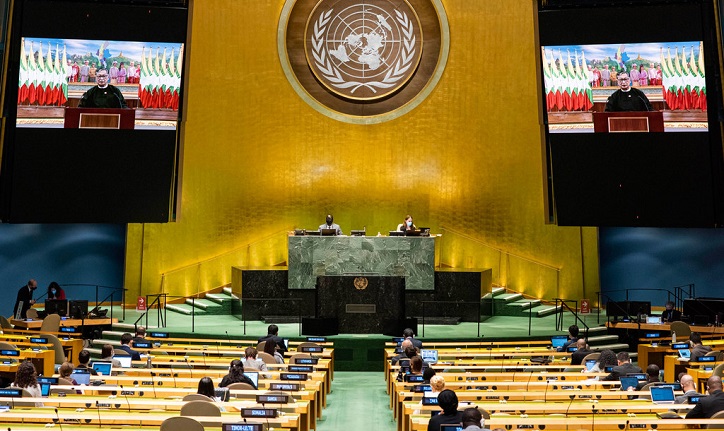 UN member states should move to hold an Emergency Special Session at the UN General Assembly to demand collective action in response to the Myanmar military’s widespread and systematic attack on protesters, said Fortify Rights on Monday

The Myanmar Police Force and Army reportedly killed more than 120 women, men, and children and arbitrarily arrested more than 2,000 since February 1.

On March 14, security forces murdered more than 50 protesters, most in Yangon, according to local news outlets and open-source media. It was the deadliest day since the February 1 military coup d’etat.

“The Myanmar military poses a threat to the peace, and its ongoing attack is grave, dire, and massive in scope,” said Matthew Smith, Chief Executive Officer at Fortify Rights. “The people of Myanmar are desperate for action, and the U.N. Security Council has persistently failed them. Now is the time for an Emergency Special Session at the General Assembly, where China and Russia have no veto power.”

During an Emergency Special Session on the situation in Myanmar, UN member states should press for a global arms embargo against the Myanmar military and targeted sanctions against Myanmar military individuals, entities, and assets, said Fortify Rights.

On sanctions, specifically, governments should coordinate to block the junta’s access to billion-dollar natural gas revenues. Member states should also press for the UN Security Council to refer the situation in Myanmar to the International Criminal Court to investigate atrocity crimes by Myanmar security forces in recent years, including genocide, war crimes, and crimes against humanity.

The UN Security Council has issued two statements in response to the situation in Myanmar since the coup, on February 4 and March 10, but failed to take any collective action or acknowledge the junta’s overthrow of the elected government as a coup d’état.

The people of Myanmar and civil society organizations have consistently called for greater action from the international community in response to the coup and the junta’s attacks on civilians, reads the statement.

Under the Uniting for Peace Resolution, if the UN Security Council lacks “unanimity” and “fails to exercise its primary responsibility for the maintenance of international peace and security in any case where there appears to be a threat to the peace, breach of the peace, or act of aggression,” then the UN General Assembly can convene “to maintain or restore international peace and security.”