Ashiyan City sued for not cleanliness 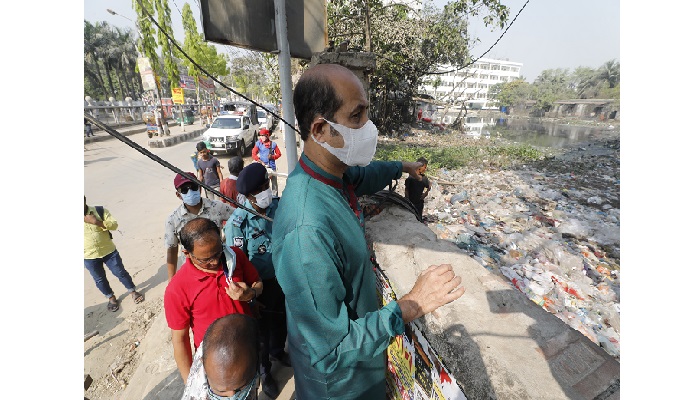 During the drive, DNCC Mayor Atiqul Islam points at the waste materials dumped in the area

Ashiyan City has been sued for not keeping clean its housing project area, which has turned into a breeding ground for mosquito.

Dhaka North City Corporation (DNCC) Executive Magistrate Mutakabbir Ahmed filed the case during a drive in Ashiyan City at Ashkona in the capital on Monday.

The magistrate has asked the Ashiyan City authorities to stop all of their project activities.

The mayor expressed his dissatisfaction over the condition of the housing project and asked the authorities concerned to take action against the housing company.

“All the activities of Ashiyan City will remain stopped until they ensure cleanliness in the project area,” he also said.

He added that they also shut down a market named “Poisar Hat” at Ashkona on the same grounds.

The DNCC mayor also said, “The housing authorities are cultivating mosquito inside the project area. We’ve found huge larvae in the water bodies filled with water hyacinth. Locals are making complaints of a mosquito menace in the area.”

“The authorities of the housing company broadcast attractive advertisements on televisions, but the total Ashiyan City has turned into a mosquito breeding ground. They are selling plots but not taking care of marshy land. City cooperation wont’ take any responsibility,” Mayor Atiqul added.

He also said they have been dissatisfied with the bad condition of some places owned by Civil Aviation and railway authorities.

“I’ve visited some areas under Civil Aviation and Airport Railway Station authorities and found breeding grounds of mosquito. We will not take responsibilities for them. They have to carry out their own duties.”