Nepal tri-nation will be a testing ground for footballers: Jamie 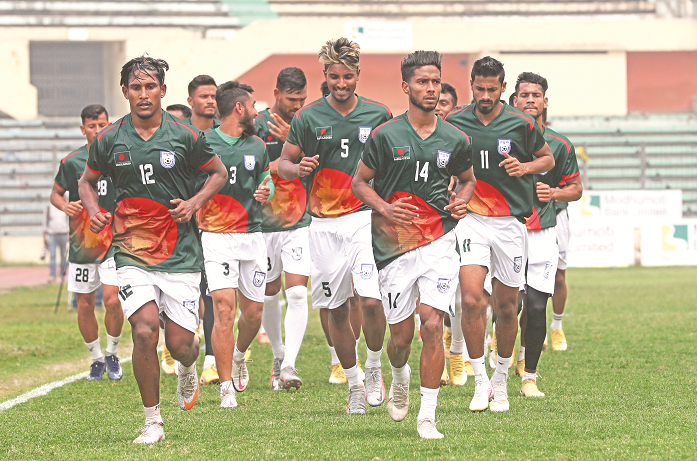 Bangladesh national football team head coach Jamie Day on Monday claimed that the upcoming tri-nation tournament would be a testing ground for his charges as he would find out the ‘good enough’ footballers for their remaining World Cup qualifier matches in June from that tournament.

Bangladesh team will play against Kyrgyzstan U-23 and the hosts in the Nepal tri-nation on March 23-29 at Dashrath Stadium and they will fly to Kathmandu on March 18.

Bangladesh were expected to host Afghanistan on March 25 of the Asian Qualifiers for the FIFA World Cup Qatar 2022 and AFC Asian Cup China 2023 but now all their remaining matches will be held between June 3 to 15 in Qatar.

“I’m not worried about the result in Nepal…,” said Day after conducting the first day’s training at the Bangabandhu National Stadium.

“The focus is not on winning there, the focus is on the players. They have to show me that they are good enough to play in June. Our target is in June. The situation will be difficult in June as we will play three games in Qatar.

“The players for the Nepal tour will give us an idea if they are good enough or not for June,” he added.

Jamie said that neither he nor the Bangladesh Football Federation will pressurize the players to win the tournament in Nepal as their main focus is on the matches in June.

Bangladesh will play their remaining matches of FIFA, AFC joint qualifiers against Afghanistan on June 3, India on June 7 and Oman on June 15 in Qatar.

“I explained to the BFF what I will do in Nepal and they have totally agreed. BFF also wants those young players to have opportunities to come forward. We have to prioritise the really important games over other games which are not as important as those.

“We want to win but there is no pressure from me or federation to the players. We look forward to playing in Nepal, but the focus is on June,” he added.

A total of 30 players out of the 31-member squad took part in the day’s sessions under Jamie and his deputy Stuart Watkiss.

Booters, who just played the first phase of the premier league, seemed fit and didn't do any extra work on their fitness. The day started with a warm-up and light exercises, followed by different drills under two coaches. Jamie worked on midfield and build-up while Stuart on attacking third.

While asked about the players' fitness, assistant coach Stuart said that he found no problems there because they had recently played in the premier league.

“Fitness should not be a problem. Players have played for ten or eleven weeks which is more beneficial than training. We haven't seen any fatigue among them,” Stuart said.

Bangladesh team goalkeeper Anisur Rahman Zico said he was optimistic to get a positive result in Nepal.

“It will be tough for us to beat Nepal at their home. Kyrgyzstan are also a good team. It will be a challenge for us. But if we do the best and play the best, we will be able to get a positive result,” Zico said.

Midfielder Masuk Mia Jony, who returned to the squad after a long 19-month, also felt confident ahead of the tour.

“All players came from the league. We are now doing training together. I'm expecting that we will be able to build it soon. We will play in Nepal to be the champions,” Jony said.