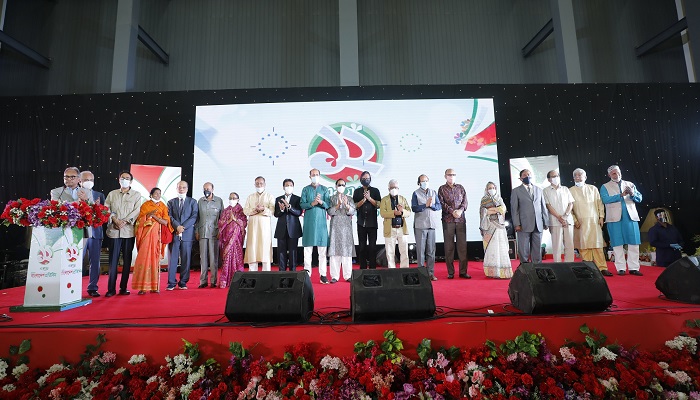 Bashundhara Group Vice Chairman Shafiat Sobhan Sanvir and Managing Director Sayem Sobhan Anvir pose for a photo with recipients of the reception at founding anniversary programme of Bangladesh Pratidin at ICCB on Monday.

The country’s largest circulated Bengali daily Bangladesh Pratidin has accorded a reception to talents of various sectors and eminent personalities who illuminated the society by their outstanding contributions.

As part of celebrating the daily’s stepping into the 12th year of founding anniversary, the management has accorded reception to the eminent citizens and talents at a function held at International Convention City Bashundhara (ICCB) in the capital on Monday.

Speaking on the occasion, Information Minister Dr Hasan Mahmud said Bangladesh Pratidin has gained popularity among the readers at home and abroad by presenting brief and objective reports.

“Newspaper is the mirror of the society. Bangladesh Pratidin has become a mouthpiece to ensure welfare of the people. Its responsibilities of journalist to project the untold stories of people and country,” he said.

Minister further mentioned that Bangladesh has set an example in poverty alleviation and food security, adding that global communities including WFO are surprised at the growing progress of the country.

“Bangladesh becomes an issue of discussion to the neighbouring countries for achieving more progress than them in many indicators,” said the minister.

He urged the people to keep the city clean as a token of patriotism and contribution to the country.

The newspaper held daylong celebration of its founding anniversary. Ministers, political leaders and people from all strata of society jointed the event.