Curse of child labour is on wane on Dublar Char 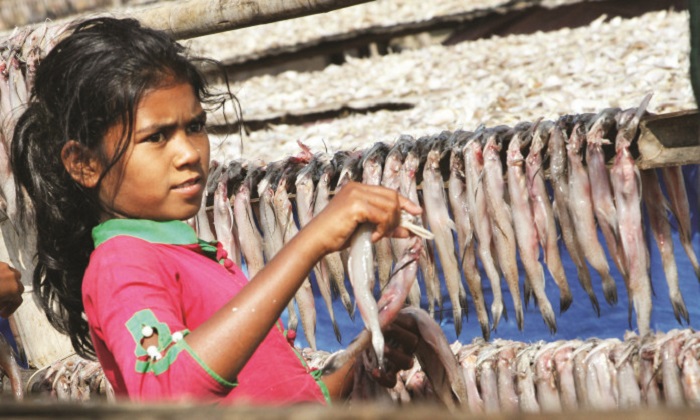 Dublar Char, located on the bank of the Surdarbans, experienced an unhealthy scenario even a few years back as a number of children were involved in child labour in dry fish areas of the char.

Child labour is a practice of having children engage in economic activity that harms on their physical and mental development.

Knowing that child labour tells upon children and keeps them from attending school, guardians of those ill-fated children forced them (children) to go to work on char areas for earning.

The children got a little wage after six months of hard work. They had to work as slaves. The children were repressed and faced harassment for a little mistake despite their hard labour.

But, the scenario has been changed during the last few years. The number of child labourers has reduced significantly.

In a recent visit to the area, the village of dry fish in Dublar Char in the Sundarbans was found bustling with activities in the current dry season. The businessmen were busy in dry fish processing. About hundreds of fishermen were processing dry fish after catching fish from the sea. And the area was mostly free from child labour.

Teenager Golam, who is now 15 years old of the area, said he comes here along with his elder brother. But, he didn’t see any other boys and girls of his age.

Dublar Char is situated on the shores of the Bay of Bengal in Dublarchar, Alorkol, Narkel Baria, Shelarchar and Meheralir Char, the largest marine fish in the Sundarbans. These chars are located in the Sharankhola range of the Eastern Sundarbans division of Bagerhat.

Sources said the target for revenue collection from the dry fish sector has been set at Taka 3.20 crore in the current fiscal year. Taka 2.47 crore was collected as revenue in last 2018-19 fiscal while it was Taka 3.17 crore in 2019-2020 fiscal.

Sources said that the salt water of the sea and the hard work under the scorching sun seemed to be the destiny of the children of Dublar Char. Those children were brought from Bagerhat, Pirojpur, Khulna and Sathkhira for six months. For this, children would get only Taka 10,000 to 12,000 each as wage.

Children who stopped studying due to financial crisis used to come here. They worked everything of dry fish processing.

The concerned think that child labour is declining as NGOs and Coast Guard Western Zone are working to stop child labour, providing free textbooks, educational equipment and stipends to all students under the ‘Education for All’ programme for the development and welfare of children.

Some people think that child labour is also declining due to the introduction of school feeding programs in poverty-porn areas.