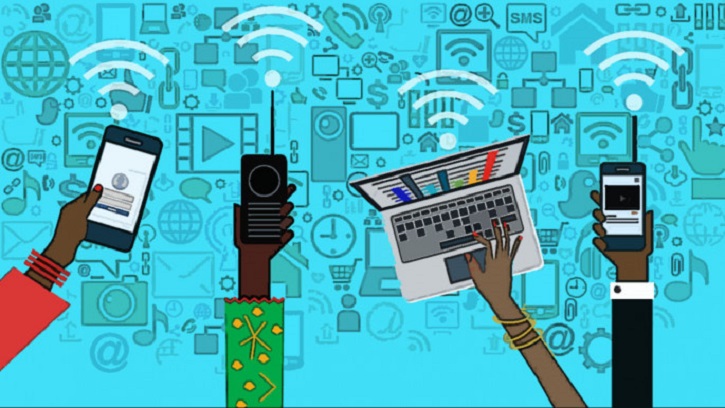 Slow internet services both for computer and mobile users may affect the government’s efforts to make the ‘digital Bangladesh’ vision a reality.

Raising eyebrows over the sudden slow pace of internet, experts opined that it may be sabotage by a vested quarter to hinder the country’s ongoing development pace and create obstacles for building a digital Bangladesh by 2021.

Talking to the Daily Sun, internet service providers said rival operators often hire hackers from outside to reduce the speed and efficiency of other networks.

Asked about the probable sabotage, Telecommunications Minister Mustafa Jabbar ruled out any possibility of sabotage to reduce internet speed in a bid to hinder the country’s development activities.

He, however, identified two reasons -----lack of infrastructure and a higher number of users with lower bandwidth capacity---for the slow speed of internet.

“The country does not have enough infrastructures for mobile and broadband internet in 4G technology. Besides, the number of internet users is higher than the bandwidth capacity of the operators,” he told the Daily Sun.

The government has connected 2600 unions with optical fibre under the InfoSarkar-3 Project, while the four mobile network operators have over 10,000 towers across the country.

“Though the government has spread the internet facilities across the country, people are not getting the actual benefits from the projects due to unknown reasons,” said the minister.

Some 103.19 million users are connected with four mobile operators while there are 9.52 million broadband connections across the country till February this year.

Meanwhile, the state of mobile internet has worsened over the last few years --- pushing the country into the 137th position among 140 countries in the Global Index of mobile internet, published in January this year.

In terms of broadband connectivity, Bangladesh is in the 96th position.

With the increasing penetration of internet, the risk for the country’s financial sector has also increased over the last few years.

The government, however, has been monitoring the cyberspace on a regular basis and working to improve the capacities of banks and financial institutions to improve network security and prevent cyber attacks.

Despite the government’s efforts, hackers recently cloned the websites of Bangladesh Bank and few other private banks to steal customer data.

Asked about the matter, a top official of the Computer Incident response Team of the ICT Division said the government had been working to improve the capacity of the public and private organizations to protect financial institutions form hackers.

“We have been holding cyber drills on a regular basis and financial institutions have been performing well,” CIRT project director Tarique M Barkatullah told the Daily Sun.

He also said that the situation of the banking sector is not like that of 2016.

Lack of policy for ensuring service quality and unhealthy competitions among internet service providers have been blamed for slow internet connectivity, experts have said.

Internet service providers said slower internet speed on selective operators or networks is also caused by targeted hacking or sabotage on infrastructure---mainly carried out by the rival service providers.

“I will take instant action against the service providers if any complaint is raised on slowing down of internet speed or disrupting the net neutrality,” Minister Mustafa Jabbar told the Daily Sun.

Bandwidth is the amount of data that can be transferred from one point to another within a network in a specific amount of time.

“I can say that the operators are reluctant to invest in bandwidth and infrastructure despite making huge profits. Recently we distributed bandwidth through an auction which will improve the situation in a month,” he said.

The government has connected 2600 unions with optical fibre under the InfoSarkar-3 Project, while the four mobile network operators have over 10,000 towers across the country.

Considering the environmental issues, the government licensed four private sector operators to improve the network and to reduce environmental risks through tower sharing in 2018.

Minister Mustafa said the development of the network is also stagnant due to a lack of interest from tower sharing companies.

“After giving pressure, the tower sharing companies began operations in the field level, which is a major challenge now for the mobile network operators.”

For the broadband internet, the minister said it is the responsibility of the NTTN operators to maintain the speed of internet services.

Echoing the minister, leaders of the Internet Service Providers Association of Bangladesh (ISPAB), the trade body of internet service providers at the retail level, said the NTTN operators are capable of managing the cost and speed of internet services as major actors.

Talking to the Daily Sun, ISPAB President Aminul Hakim said the country is confined to two NTTN operators for internet network and the retailers are failing to provide high-speed internet for high transmission cost.

ISPAB leaders also said service providers are offering internet services without any proper regulation as the country has no updated broadband policy.

The ISPAB President further mentioned that lack of awareness in device management by the users can also affect the speed of internet.

Regarding the broadband internet, he said internet speed gets slower when the service providers engage in unhealthy practices.

“The number of licensed internet service providers is more than the market demand and anyone can start this business without any policy. As a result, the end-users often don’t get quality services. Some service providers use specialized hardware to slow down the speed of rival operators. Occasionally, the operators hire hackers to create unwanted traffic to a targeted network which makes the speed slower,” Sabir, an executive member at Apnic (Asia Pacific Network Information Centre), told the Daily Sun.

Sabir, chief technology officer at [email protected], however, said the NTTN operators have nothing to do with the internet speed.