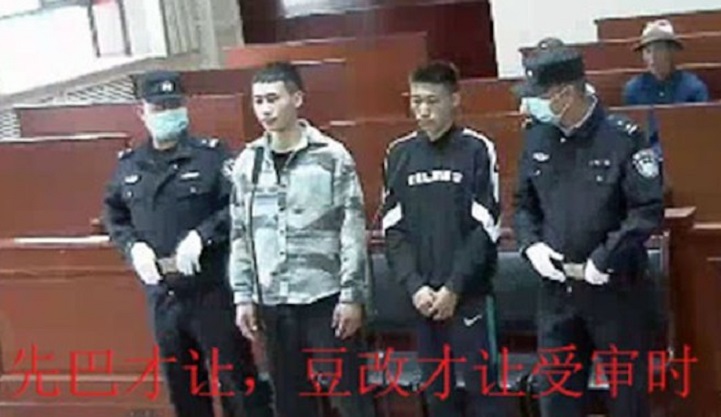 Jampa Tsering and Dugkar Tsering in court (Photo by TCHRD)

The Tibetan Centre for Human Rights and Democracy (TCHRD) on Thursday released a report of detained Tibetan students for promoting a self-designed flag and emblem for a local football team in Tsolho (Ch: Hainan), Qinghai Province in Amdo. The rights group said a Tibetan student named Jampa Tsering was sentenced for one year and six months in prison for “inciting separatism” along with one year of “deprivation of political rights” on Feb. 23.

However, Jampa’s sentence has been suspended for two years and has been currently placed under probation. Another student named Dugkar Tsering was exempted from any criminal punishment since it was his first offence. Both of them had their mobile phones confiscated by the officials. Jampa Tsering was sentenced last August and was held guilty for “publicly displaying the flag and logo of the football team and [for] sharing images on QQ”. He was also accused of contacting Dugkar Tsering to obtain “illegal pictures”, which the court equated with the crime of ‘undermining national unity’ and ‘inciting separatism’.

The Dharamshala-based human rights organization said that they strongly condemned the arbitrary detention of the two Tibetan students who displayed the team flag and logo at the 6th “Holy Lake Cup” football match in Chabcha (Ch: Gonghe) County. Photos and videos of the event were shared on their WeChat Moments that were seen by many local Tibetan netizens. The authorities quickly claimed that Jampa had created “a bad political impact”.

TCHRD said that the exact design of the flag and emblem that the authorities considered illegal has not been obtained yet, but however, it is common for Tibetans to be arrested for producing or displaying the national flag. The report demanded that Chinese authorities drop all charges against the two students and restore the human rights immediately without any conditions.

“The detention of Jampa Tsering and Dugkar Tsering violated their right to freedom of expression and opinion and freedom of personal liberty, hence they must be adequately compensated for and the guilty officials punished for violating human rights. The criminalisation of Tibetan national flag goes against China’s policy of granting autonomous rights and freedoms including the right to fly and hoist Tibetan national flag,” TCHRD said.