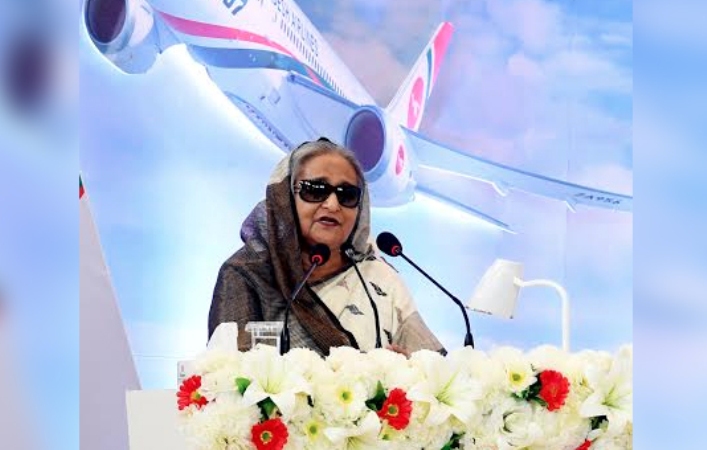 Prime Minister Sheikh Hasina on Sunday asked all concerned at Biman Bangladesh Airlines to take good care of all the aircraft in its fleet and maintain better passenger services.

“Sixteen new aircraft have been procured with public money, and there’re now 21 aircraft in Biman’s fleet. These should be kept safe alongside providing better services to passengers. I’m asking you to have a special attention to all this,” she said.

The Prime Minister said this while inaugurating the two new aircraft – "Akash Tori" and "Shwet Balaka" at the VVIP Terminal of Hazrat Shahjalal International Airport, aiming to increase flight frequencies and expand the services of the national flag carrier, particularly on domestic routes.

She joined the programme virtually from her official residence Ganabahban.

Sheikh Hasina said all those involved with Biman Bangladesh Airlines, which represents Bangladesh in the world, have to remember that this is Bangladesh and this country has been liberated in lieu of the blood of millions of martyrs. “It’s the essential duty and responsibility of all to brighten the image of this country.”

The Prime Minister asked all to perform their designated duties with utmost sincerity to develop the country and make its economy stronger which will benefit both the country and its people. “And I do want that.”

With the Dash-8 planes, the Prime Minister said, Bangladesh will be able to increase its communication with the neighbouring countries apart from developing it at domestic level.

She said the government is upgrading Cox’s Bazar airport to an international one as this airport can play an immense role on the international air route. “And Bangladesh will be more prosperous economically,” she said.

The newly-inducted aircraft are the second and third Dash 8-400 ones for the airliner. The second one arrived in the country on February 24 while the third one on March 5 last.

The first Dash-8 aircraft, ‘Dhrubotara’, purchased on a government-to-government basis from Canada, was added to the Biman's fleet on December 27, 2020.

The new 74-seat Dash 8-400 aircraft is built by De Havilland, a well-known Canadian aircraft manufacturer. It is equipped with eco-friendly and advanced facilities like HEPA (high efficiency particulate air) filter technology, that completely purifies the air inside the aircraft in just four minutes.

These two brand new aircraft have been added to Biman’s fleet to expand its operation in shortrange destination, including domestic and South Asian ones.

The number of the aircraft in Biman Bangladesh Airlines fleet increased to 21 with the inclusion of the two new planes.