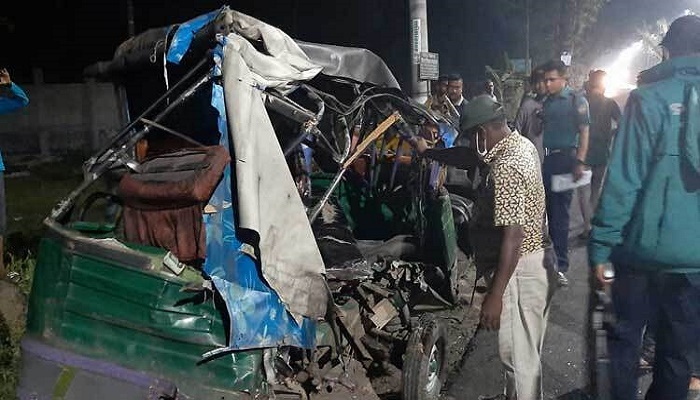 Two madrasa students were killed and five others injured in a head-on collision between a three wheeler (locally known as Mahindra) and a passenger bus in Kashipur area in Barishal on Saturday night.

The deceased were identified as Md Hamja, 11, son of Md Jafar and Al Noman,13, son of Aktaruzzaman Hafeez, both of them hailing from Mathbaria upazila of Pirojpur. They were students of Hefz department in Tahfizul Quran Madrasa in Kaunia area of Barisal city.

The passenger bus of ‘Sakura Paribahan’ collided with the three wheeler on which a man named Aktaruzzaman Hafeez along with 7 student, including his two sons, were returning to Barishal after attending a ‘mahfil’ at Sarsina Darbar Sharif in Nesharabad upazila of Pirojpur at 10:00pm on Barishal-Dhaka highway, leaving seven passengers of the vehicle injured, Kamlesh Chandra Haldar, officer-in-charge (OC) of Barisal Metropolitan Airport Police Station, said.

Later, locals took the injured to Barishal Sher-e Bangla Medical College and Hospital where duty doctor declared Hamja dead at 10:45pm on Saturday while Noman succumbed to his injuries at 12:15am early Sunday.