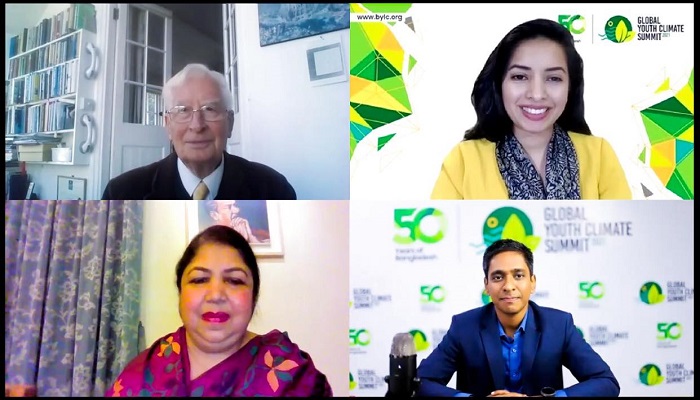 A study conducted by Bangladesh Youth Leadership Center (BYLC) and the Centre for Urban Studies (CUS) found that while 97% of Bangladeshi youth are aware of climate change, only 50% perceive this as a current  problem.

BYLC’s study titled ‘Youth and climate change: Bangladesh context’ was conducted to understand youth’s perspectives on the impact of climate change. 2,000 youth, aged between 18 and 35, across eight divisions of Bangladesh were surveyed under this study. The findings were presented in a panel conversation on the second day of the Global Youth Climate Summit, where discussants included the Dutch Ambassador Harry Verwei, FCDO Development Director Judith Herbertson, eminent environmentalist and BCAS Director Atiq Rahman.

The study also found that 31% of the youth surveyed are taking initiatives to protect the environment.  When asked about the initiatives youth think they can take, most of them mentioned participating in climate change projects, running awareness campaigns, and joining environmental organizations. However, none of the youth surveyed thinks that walking or riding a bicycle can be an option to mitigate climate change. Survey participants were also asked how they could contribute to minimizing the effects of climate change. 79% youth said that they can participate in projects on climate change to learn how to create awareness on the issue while 73% said that they could encourage friends, family, and neighbors to take necessary steps. 47% said they can consider limiting their family size through proper family planning while 14% said they could curb meat consumption.

Besides presenting findings from the Bangladesh study, BYLC also launched a global youth climate pledge at the Summit which encourages youth to take action in the fight against climate change. 600 youth from more than 80 countries participated in the two-day long virtual Summit.

A number of 12 youth climate champions, representing Bangladesh, Guinea, India, Indonesia, Kenya, Lebanon, Pakistan, Paraguay, and Somalia, were competitively selected from the delegates and recognized for their ideas to combat climate change at the closing plenary and award ceremony of the Summit. Each of the champions will receive a full scholarship to attend a BYLC leadership course and a USD 1,000 award for their climate restoration projects.

Speaking as the chief guest at the award ceremony, Honorable Speaker of Bangladesh Parliament Dr. Shirin Sharmin Chaudury congratulated the climate champions as well as the summit delegates, and expressed hope that the earth will heal under their leadership. “I commend BYLC for taking this forward-looking global initiative engaging youth. This will undoubtedly stand as one single initiative from both developing and developed countries to raise youth voices on the climate crisis,” she said.