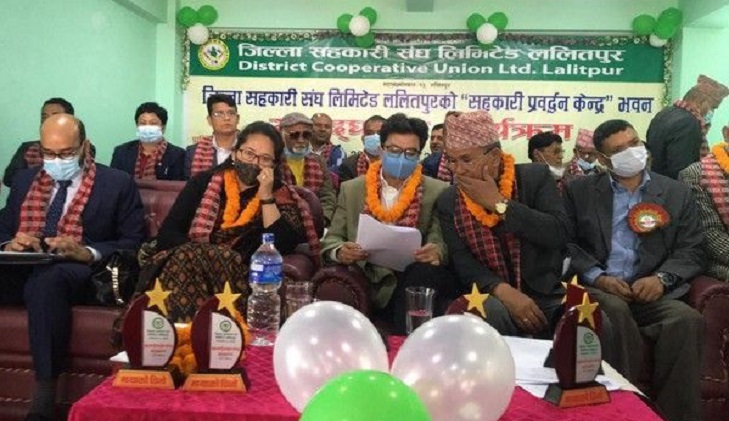 With India’s financial assistance of Nepali Rupees of 35 million, the Indian Embassy in Nepal on Wednesday inaugurated the Co-operative Promotion Centre in the Lalitpur district with an aim to further strengthen farming communities of the Himalayan nation.

According to an official statement, Namgya C. Khampa, Deputy Chief of the Indian High Command inaugurated the Co-operative Promotion Centre.

“The project was taken up as a High Impact Community Development Project and implemented by District Coordination Committee in Lalitpur, the new building was built under ‘Nepal-Bharat Development Cooperation’,” the statement read.

The building will have three floors, the first and the second floors will be used for an open market, office purposes, training rooms, resource centres and cafeterias, according to the report.

The basement will be used as a parking lot and other multipurpose halls.

The inauguration ceremony was attended by former Finance Minister Uday Rana, Madhav Dulal from the Government of Nepal, Chairman of the Co-operative Union Limited from Lalitpur, and representatives of the District Coordination Committee.

The District Cooperative Union Ltd. Lalitpur (DCULL) was established in 1972, it has 765 cooperatives with a total number of 3,50,000 membership.

The establishment follows the mandate to lead, support, coordinate and promote activities of the members, to develop and strengthen farming communities.

“The newly constructed Cooperative Promotion Centre is envisaged to enhance the marketing capability of the cooperatives and their farmer members and establish a direct linkage between farmers and consumers. The building is also structured to serve as an Information Centre for people who have an interest in the field of marketing agricultural products,” read the statement.

Along with the construction and conservation programs, the Indian Government has also gifted 18 ambulances and 9 school buses to various Health Departments, NGOs, and Educational Institutes in the Lalitpur District.

According to the statement, “In the last two years, India has also trained 59 agriculture scientists, farmers and agriculture policymakers in the areas of organic farming, soil testing and fertilizer science in premier Indian agriculture centres in National Capital Region of Delhi.”