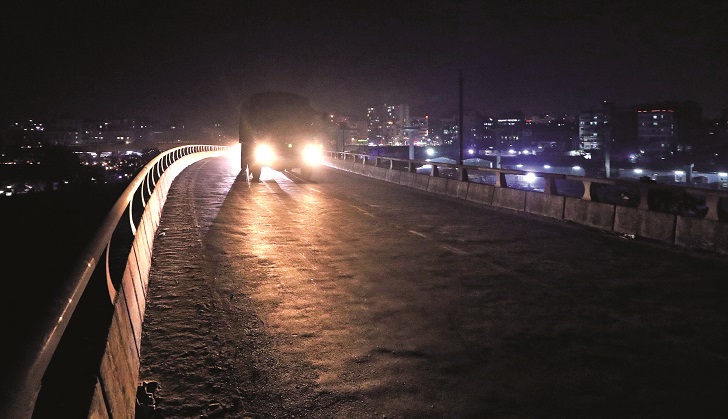 As lamp-posts on Kuril flyover in the capital have gone out of order, criminals roam around the flyover at night. Various crimes are taking place in the dark. The photo was taken on Friday night. --Md Nasir Uddin

Most of the flyovers and footbridges in the capital have turned risky and unsuitable for use by vehicles and pedestrians for lack of proper maintenance by the authorities concerned.

Commuters said lights and closed-circuit television (CCTV) cameras of those flyovers and footbridges remained out of order for long, turning those into a safe haven for criminals at night.

They alleged that vagabonds roam around the footbridges while a section of traders, being blessed by influential quarters, is running business occupying footpaths under the bridges.

A stinky smell also prevails throughout the bridges forcing pedestrians to avoid those.

City dwellers said they do not feel safe to use the flyovers and footbridges at night for those being risky zones for road accidents and a safe haven for criminals for lack of street lamps and CCTV cameras.

Al Amin Islam, a biker, told the Daily Sun that he does not feel secure on the Moghbazar-Malibagh flyover at night due to darkness. “I heard that a motorcycle was snatched after killing its rider on the flyover. Now, I feel insecure about using the flyover at night because there’s no light and CCTV camera. An untoward incident may take place again,” he said.

He demanded that the authorities concerned immediately install lamps and surveillance cameras on the flyover to avert the recurrence of such untoward incident.

Khadiza Begum said she fell victim to members of the transgender community while using a footbridge in Paribagh in an evening. “The footbridge has no light and it’s a safe haven for criminals and sex workers,” she said.

Assistant Professor of Accident Research Institute at Bangladesh University of Engineering and Technology (Buet) Kazi Md Shifun Newaz said, “If there’s no light in flyovers, there’s a high possibility of accidents due to poor visibility. Besides, the spots become a safe zone for criminals at night.”

He underscored the need for ensuring lights on the flyovers to avoid accidents and address criminal activities.

Sources said there are six flyovers and over 100 footbridges under the two city corporations of Dhaka.

During a recent visit, it was found that street lamps on most of the flyovers --- Moghbazar-Mouchak, Mohakhali and Kuril -- have been out of order for long.

Users said the bridges remain dirty while hawkers, drug addicts and criminals roam around there.

They also said Rajdhani Unnayan Kartripakkha (RAJUK) built the Kuril Flyover and handed it over to Road Transport and Highways Division recently for management.

Asked, DSCC Additional Chief Engineer Zafar Ahmed said the maintenance work on the Moghbazar Flyover stopped for lack of fund and other complexities.

He, however, said they will start their maintenance work soon. “Now, we’ve decided to install 450 lights in the flyover with our own budget. The installation work will start soon,” he said.

Zafar also said most of the footbridges under the DSCC were built under the ‘Clean Air and Sustainable Environment’ project and those have not yet been handed over to the Electrical Engineering department of the city corporation.

Admitting the fact, he said, “The footbridges haven’t yet been handed over to us and that’s why we’re not taking care of those. However, we’ll take a project for installing lights in footbridges.”

Deputy Commissioner of Dhaka Metropolitan Police (Ramna Zone) Sazzadur Rahman said they sent letters to the higher authorities concerned several times for installing CCTV cameras in Moghbazar Flyover but yet to get any response.

“We’re preparing another demand note for installing CCTV cameras in the flyover to secure the journey of commuters,” he said.

Talking to the Daly Sun, Sub-assistant Engineer of Road Transport and Highways Division Atik Zawad said they will take a plan about the Kuril Flyover on completion of the handover process. “We haven’t yet taken over the flyover from RAJUK. On completion of the process, we’ll take care of it,” he said.

He also directed the DSCC officials to free the flyovers from illegal occupation and ensure cleanliness. “The flyovers go under the grip of illegal occupation, become dirty due to the mismanagement. Different quarters are designing evil plans on those. We’ll free them from grabbers gradually for smooth vehicular movement.”