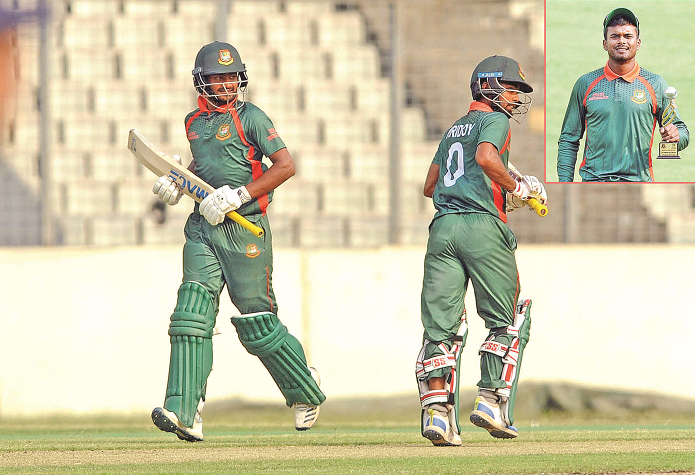 Bangladesh Emerging team batsmen – Towhid Hridoy (right) and Mahmudul Hasan runs between the wicket against Ireland Wolves during the fourth one-day match at the Sher-e-Bangla National Stadium in the capital on Friday. Man-of-the-match awardee Sumon Khan is seen in the insert. –BCB photos

Pacer Sumon Khan finished with 4-31 before Towhid Hridoy and Mahmudul Hasan made unbeaten fifties as Bangladesh Emerging team outplayed Ireland Wolves by eight wickets in the fourth match to seal the five-match one-series in the capital on Friday.

Sumon provided a career-best List-A performance while skipper Saif Hassan, Rakibul Hasan and Mukidul Islam also claimed two wickets each as Wolves were bundled out for 182 runs in 46.2 overs after Bangladesh sent them to bat first.

Mark Adair made the highest 40 runs while Ruhan Pretorius and Graham Hume made 35 and 29 not out respectively.

Wolves pacer Peter Chase took two quick wickets of Tanzid Hasan and Yasir Ali with both scoring two runs each but Hridoy and Mahmudul then made an unbeaten stand of 176 runs for the third wickets as the hosts reached 186-2 in 41.3 overs to go 3-0 up in the series.

Hridoy struck 88 off 97 balls with nine fours while Mahmudul made 80 off 135 balls with eight fours.
Bangladesh team earlier won the second and third match by four and six wickets respectively while the first match was abandoned midway in the contest.

The fifth and final one-day match will take place at the same venue on Sunday.

The two sides are also scheduled to play two T20s on March 17 and 18 respectively at the same venue.