Polls will be held in due time as per constitution: Quader 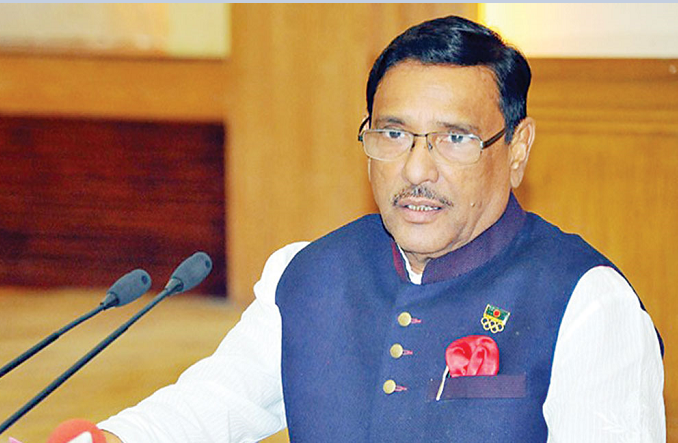 Awami League General Secretary and Road Transport and Bridges Minister Obaidul Quader said on Friday the next parliamentary elections will be held in due time following the constitution and BNP has no need to place any demand centering the polls.

He said this at a regular press briefing at his official residence on parliament premises in the city.

Referring to BNP’s demand for holding polls under a non-party and neutral government, Quader recalled that once BNP Chairperson Khaleda Zia had commented that “none is neutral except insane and children and the concept of caretaker government is absurd.”

He said: “The polls will be held in due time following the constitution.”

Quader said Prime Minister and Awami League President Sheikh Hasina has the courage to accept the people’s verdict in polls. The AL general secretary said the BNP’s workers are now annoyed with their leaders because of the party’s aimless and wrong politics.

“The people are not unfamiliar with BNP’s style of movement. They are making their evil attempts to create issues over trifling matters,” he said.

About BNP’s allegation that the government made the Digital Security Act to sustain in power, the minister said Sheikh Hasina’s government stay in power with people’s confidence and love and not capitalizing on any act.

The Almighty and the people have the authority to give power, he said.

Quader said the government formulates any law in the interest of the people. “Different countries in the world have legal structures for digital security. Freedom of expression doesn’t mean doing or saying whatever we want,” he said.

The government has already issued stern directives against any kind of misuse of the act, he said. The AL general secretary said now BNP has become a party of spreading rumors losing its identity as a political party.

BNP is now solely dependent on spreading rumors and propaganda and that is why it is opposing the Digital Security Act and the modern technology as well.