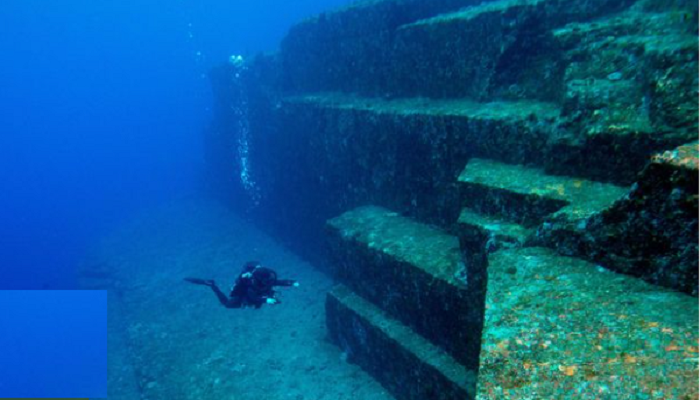 In 1987, a local diver exploring off the coast of Japan’s southern Ryukyu Islands stumbled across a startling discovery. Twenty-five metres below the surface, he spotted a series of almost perfectly carved steps with straight edges. Known today as the Yonaguni Monument, this massive 50m-long-by-20m-wide behemoth is one of the world’s most unusual underwater sites.

Nicknamed "Japan’s Atlantis", the rectangular, stacked pyramid-like monument is believed to be more than 10,000 years old. Some think it’s all that remains of a long-lost Pacific civilisation, possibly built by Japan’s prehistoric Jomon people who inhabited these islands as early as 12000 BC. Others say that the site resembles natural formations elsewhere around the world with distinctly defined edges and flat surfaces, such as Northern Ireland’s Giant's Causeway, whose thousands of interlocking basalt columns were formed by a volcanic eruption millions of years ago.

Despite Yonaguni’s narrow passageways, arched entrances and seemingly parallel 90-degree angles, the unusual formations are largely believed to be natural rather than man-made – particularly since the structure is attached to a larger rock mass. The site’s well-defined layers are also likely to have gradually formed due to the site’s position in an earthquake-prone area.

Although the monument’s mythical origin story might be untrue, it will likely continue to fascinate those lucky enough to dive here and get up-close to this unique geological phenomenon.