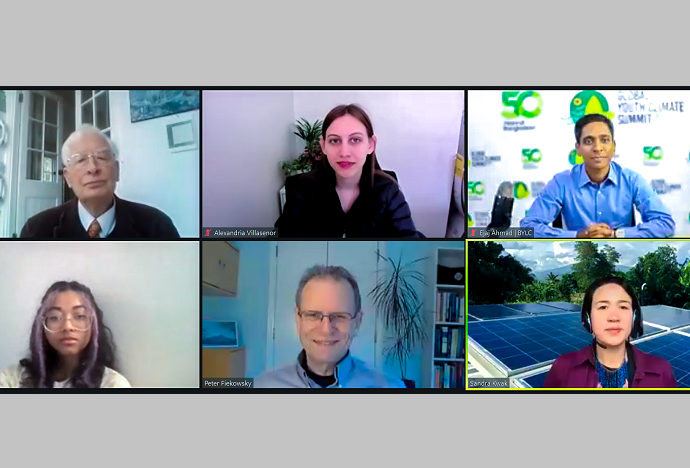 As part of its celebrations for Bangladesh’s 50th anniversary of independence, Bangladesh Youth Leadership Center (BYLC) inaugurated the virtual Global Youth Climate Summit, in partnership with the California-based Foundation for Climate Restoration, Resilient Markets, and the Centre for Climate Repair at Cambridge.

The summit held on Thursday, was attended by over 600 delegates from 80 countries across six continents. Through the summit, BYLC aims to mobilize youth, build their leadership skills and empower them with the tools to lead the fight against climate change.

Speakers at the summit stressed on the need for immediate action to address the devastating effects of climate change, especially on developing countries.

"We believe that the climate crisis is Bangladesh’s biggest challenge in the next 50 years. Our very own survival as a country depends on how the world not only achieves net zero emissions but also brings greenhouse gases to pre-industrial levels,” said Ejaj Ahmad, founder and president of BYLC, at the opening plenary.

By the middle of this century, Southeast Asia will be the hardest hit region of the world, warned Sir David King, emeritus professor at Cambridge University and founder of the Centre for Climate Repair.

“Sea water is being pushed into land every time a hurricane or tsunami hits. This is already a problem in countries like Bangladesh. Within the next 30 years, perhaps 200-300 million people from Southeast Asia will be forced to move somewhere else to live. All of this will happen unless we take urgent action to manage the risks of the climate crisis. And when I say we, I mean every one of us living on this planet,” he said.

As the frequency and intensity of climate change events increases, it is today’s youth who will face the worst effects and yet they are not being prepared for the crisis, said speakers.

“When I started organizing for climate change action, I quickly noticed that young people weren’t really informed about climate change. It isn’t taught in many schools. This has a negative impact on our ability to prepare for our future and make change in the world. We need to support youth to take direct action for their future,” said 15-year-old climate activist and co-founder of the US Youth Climate Strike movement, Alexandria Villasenor.

While stressing that there is no one-size-fits-all solution to address the climate crisis, youth need to make noise in whatever way they can to be heard by their government and lawmakers, said Rebeca Sabnam, an 18-year-old Bangladeshi-American Cafeteria Culture youth advocate.

Other speakers at the summit on day one also addressed the need for climate restoration to return the climate to a safe and healthy state.

“The climate restoration movement focuses on the flourishing, rather than just survival, of humanity. This means getting carbon emissions down to levels humans can be healthy in and getting the population rate back to where extinction rates go down to roughly zero,” said Peter Fiekowsky, founder and chairman emeritus of the Foundation for Climate Restoration.

Prior to the Summit, delegates were required to sign a pledge co-created by young people to commit to the actions necessary to avert the global climate catastrophe.

“The Youth Global Climate Pledge is launched from Bangladesh, a young country seriously threatened by global warming and the rising ocean; but it is a global pledge, created by young people who seek to recruit young people worldwide in each of the six inhabited continents to join them in providing the leadership that is lacking in the world today, so that gradually more and more of us will choose to tread softly,” said Sir Christopher Ball, former warden of Keble College, Oxford University.

On its closing ceremony on March 12, the summit will honor 12 youth climate champions, competitively selected from the delegates with a full scholarship to attend a leadership course and a USD 1,000 award for their climate restoration projects.