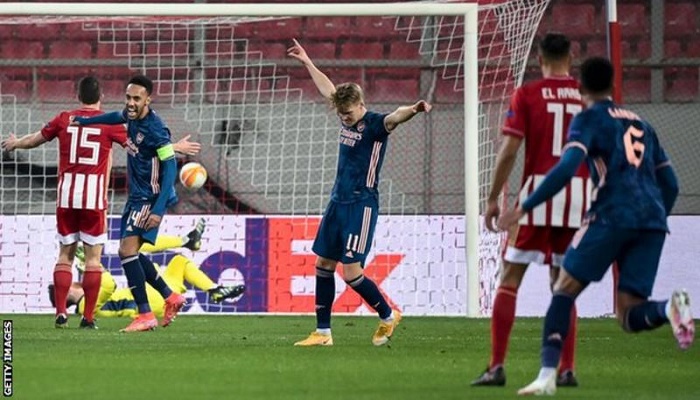 Mikel Arteta says his Arsenal side need to stop being their own worst enemy after defensive lapses undermined their last-16 first-leg victory over Olympiakos in the Europa League.

While Martin Odegaard's opener paved the way for their win, familiar failings at the back saw the Greek champions level and made life uncomfortable until late goals from Gabriel and Mohamed Elneny swung the contest back in Arsenal's favour.

"We have to be very clear and honest with ourselves. We gave three chances to the opponent, they took one and at that level they are going to punish you," Arteta said.

"If we want to go to the next level we have to stop that and be more ruthless and when we are that dominant, kill the games off."

Lax play from both David Luiz and Odegaard had gone without punishment but Arsenal were not as fortunate when Bernd Leno played substitute Dani Ceballos into trouble and Youssef El Arabi stroked in an equaliser.

It added to a litany of recent errors, with Arsenal guilty of conceding soft goals against Burnley and Benfica in fixtures over the last month.

"The goals and chances we have conceded are coming from ourselves," Arteta added.

"That's positive because when we stop it, we will be stronger. The reality is that we have to stop it immediately. It's my responsibility. I make them play the way we want to play it is just understanding the risk and reward."

Thankfully for Arteta, three valuable away goals mean his side are well placed to avoid a repeat of their dramatic exit to Olympiakos last term.

In general he will also be satisfied with a display that saw Arsenal create several early openings and take the lead courtesy of Odegaard's powerful 20-yard drive.

The Norwegian midfielder could and perhaps should have opened the scoring earlier than that, skewing a left-footed effort wide, while Pierre-Emerick Aubameyang was also superbly denied a goal when home goalkeeper Jose Sa diverted his header on to the crossbar.

And while the Gunners did not run away with the game, their resolve came to the fore at the Karaiskakis Stadium for the second time in under a month.

Twelve minutes after El Arabi had spurned a chance to put the hosts ahead, Gabriel towered above his marker to head in Willian's right-wing corner, with Elneny's late effort adding deserved gloss to the result.

'Anything can happen' - what they said

"We gave them a goal trying to play out from the back but then we reacted well to score two more goals. Overall a really positive result but we have to stop making the errors that are costing goals because we cannot sustain that.

"This is half-time and anything can happen. Full focus and we start 0-0 again in the second leg and try to win the game."

Willian the provider again - the stats

--Arsenal have won eight of their nine Europa League games this season (D1), and are the highest scorers in the competition so far (27 goals).

--Having won their first three home meetings with Arsenal in all competitions, Olympiakos have now lost their last three against the Gunners at home.

--Willian has provided more assists for Arsenal in all competitions than any other player this season (7), including setting up all three of Gabriel's strikes for the Gunners.

--All four of Mohamed Elneny's goals for Arsenal have come in European competition (1x Champions League, 3x Europa League), with three of those coming from outside the box.

--Martin Odegaard's first-half strike was his first ever goal for Arsenal. The Gunners have now had more different goalscorers in the Europa League this season than any other side (14).

--No player has made more errors leading to a goal in the Europa League this season than Arsenal's Dani Ceballos (2), with the Spaniard's two errors coming in his last two games (also v Benfica).

--Olympiakos' Youssef El-Arabi has scored in his last two Europa League games against Arsenal, with his two goals against the Gunners accounting for 50% of his total in the competition.