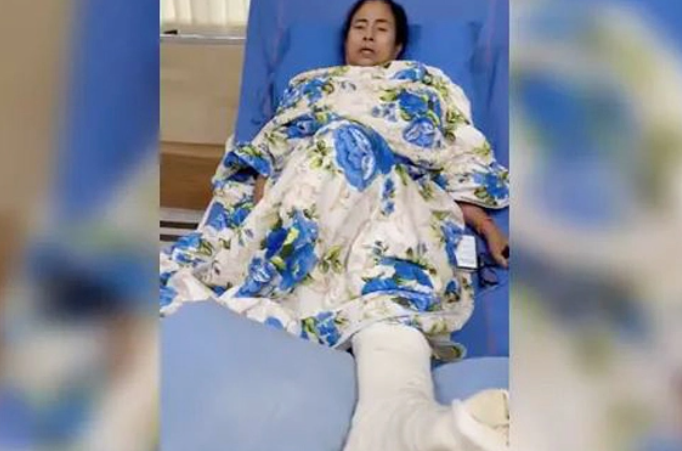 A day after West Bengal Chief Minister Mamata Banerjee was "injured in an attack" in the eastern Indian state's Nandigram town, the firebrand politician Thursday urged her supporters to maintain calm.

In a video message from her hospital bed in state capital Kolkata, 66-year-old Banerjee said, "I appeal to everyone to be calm and maintain restraint, and to not do anything that will inconvenience people."

"It is true that I was badly hurt. I was injured in my arm, leg. There were bone injuries... ligament injuries. I suffered chest pain... I was greeting people from the car bonnet and the crowd pressed into me, the entire pressure was on me. My leg was crushed," she said, promising to be back in 2-3 days.

On Wednesday evening, Banerjee claimed that she was attacked by four to five men outside a temple in Reyapara area of Nandigram, 130 kms from state capital Kolkata, when there were no security personnel around her.

"It's a conspiracy, there were no policemen around me at the time," she had said, before being whisked away by her bodyguards in her official car.

The Chief Minister was in the town of Nandigram to file her nomination papers to fight the upcoming assembly elections.

Nandigram is the potboiler of assembly elections in Bengal, where Banerjee has been challenged by her erstwhile close aide Suvendu Adhikari, who has now joined India's ruling Bharatiya Janata Party (BJP).

Trinamool Congress has condemned the attack on Banerjee. Party MP and Bengali actress Nusrat Jahan tweeted, "Strongly condemn the attack on our beloved leader Mamata Banerjee. You may try to harm her, but our Didi shall stand tall always. Pray for her speedy recovery."

The BJP has, however, called the attack a "drama". Local BJP leader Arjun Singh said last night, "She is doing drama only. Some 300 police personnel are providing security to the CM. She is doing this to get sympathy."