Thailand proposes a solution to the Myanmar crisis 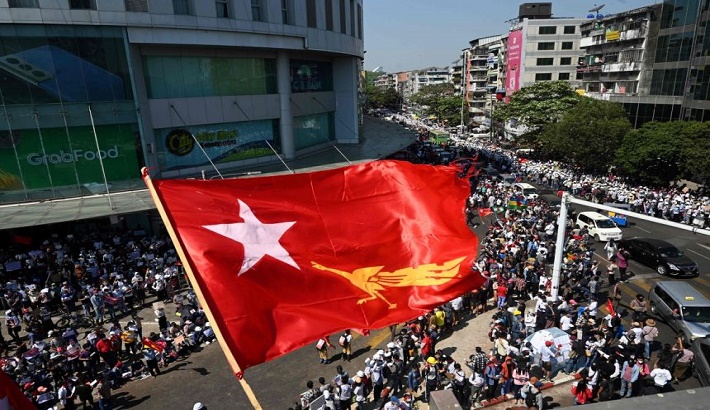 Thailand has proposed to the Myanmar military to initiate a dialogue with the National League for Democracy (NLD) party as a solution for the country to move forward and re-establish national stability, Thai Foreign Minister Don Pramudwinai said.

"Other proposed solutions are difficult to materialise in our view... There must still be attempts from the international community, especially its neighbours, to find a solution. Our solution is to find a way to establish working relations (between the two sides)," Mr Pramudwinai said in an interview with Asia News Network in Bangkok.

"It's best for them to walk forward together, as it had proven that by sticking together, trying to depend on one another, rest assurance by one another or even quarrel at times, it is the best for their country," he said.

The Thai proposal was conveyed to Myanmar Foreign Ministry's representative U Wanna Maung Lwin by Mr Pramudwinai during a tete-a-tete discussion on Feb 24 before they were joined by Indonesian Foreign Minister Retno Marsudi at Don Muang Airport in Bangkok.

Asked whether there has been progress since then, Mr Pramudwinai said the Tatmadaw, which the Myanmar armed forces are called, would have to assess the situation.

"Everyone wants it to end quickly. But they should remember that it has only been a month and many incidents and issues in the past - none ended quickly," he said.

Thailand has been subject to widespread criticisms, especially on social media, of its relative silence on the Myanmar crisis.

Thailand's intervention - and Asean's so far - is unprecedented in the history of the regional bloc which has, since its inception, adhered to the principle of "non-intervention" in the domestic affairs of member states.

The Thai proposed solution to the Myanmar crisis - which sprang from the military coup on Feb 1 - differs from those made by the international community and Asean. Bangkok's proposal has been conveyed to other Asean members as well as other countries, including the United States and Japan, according to a Thai Foreign Ministry source.

"Ours is not the only option which Myanmar has... we know they have other (channels). But the progress depends on what happens on the streets with the protests," said the source.

Protests through the Civil Disobedient Movement, including strikes by workers and civil servants, are now in the 38th day.

More than 60 people have been killed due to violent crackdowns and more than 2,000 arrests have been made, according to Assistance Association for Political Prisoners.

The Foreign Ministry source said the escalation of violence on the streets, or more sanctions, will only prolong the path towards the effort to establish dialogue between the Tatmadaw and NLD.

It is the only solution which the Thai government envisions, based on the long history and multiple relations between Thailand and Myanmar.

Although many NLD senior members, including its leader Aung San Suu Kyi, are under arrest, the Thai government believes that the Tatmadaw can establish communication with other members to inch themselves towards a workable resolution, in order to return to normalcy at the earliest opportunity.

The Thai Foreign Ministry source said the issue of the official recognition of the Tatmadaw-appointed government or others are in the peripheral, with the effort to have both sides establishing a dialogue being a priority.

Mr Pramudwinai said in an interview that the Thai solution is based on a consensus between the Foreign Ministry, the Thai military and Prime Minister Prayut Chan-o-cha.

He said it was paramount that trust is established between Thailand and the Tatmadaw.

"We have to understand them, read their minds and to convey that Myanmar can return to normalcy of societal happiness as before," Mr Pramudwinai said. "We don't want to see bloodshed on the streets. It has to be a win-win situation."

Thailand's proposal has rested on its assessment that the military coup came about because the Tatmadaw status was being threatened with elimination to the point that they became paranoid, said the Foreign Ministry source.

MORE ON THIS TOPIC

Supporting new Myanmar elections is not the solution

But Thailand has also made known to the Tatmadaw that there should be restraint on violence, the need to de-escalate and not escalate matters, and to find a way to negotiate a settlement, the source said.

Thailand also conceded that the escalation of violence is worrisome as it will lead to strong reactions from the international community, especially from Western nations. That would result in more sanctions and more step-up reactions, which may lead to a spiralling and unending crisis.

In addition, it will lead to more external interventions, whether moral or financing, to support the protests. It could also lead to arms and weapons or other unknowns, said a Thai source.

Such a situation could lead to more violent protests and even increasing armed ethnic activities, which would eventually affect Thailand as a neighbour and Asean as a whole.

"So our view is that the Tatmadaw and NLD must establish a dialogue because we don't think the Myanmar military will be happy with chaos nor the threat of instability where it might lead to, and to what unpredictable level ," the source said.

"And in this tech era, threats endangering a state could come from anywhere," the source added, and that is something that Asean would not tolerate. "It can't happen. This is one of the reasons why we hasten to find a way for both sides to talk as it is beneficial to the Tamadaw."

The source added that Thailand is not acting alone in its endeavour to bring an end to the Myanmar crisis but to "bring our friends, Asean, on board to help to speak and act as a base for Asean to begin a channel of communication and other countries to join in".

China is known to be trying to find a solution to the crisis as Myanmar is also its neighbour - an effort which Bangkok welcomes, said the source.