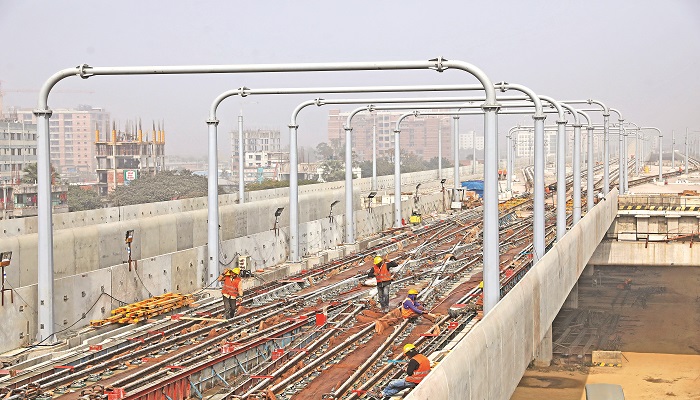 The long wait of Dhaka city dwellers for a smooth public transport system is set to end in a few months as the first Dhaka metro rail is expected to hit the track by this December.

Dhaka Mass Transit Company Ltd (DMTCL) hopes to open the Uttara-Agargaon segment of the MRT-6 line stretching over 20km from Uttara to Motijheel by the timeframe.

The first phase of the dream project, designed to ease the capital’s nagging traffic congestion, has already been visible recently and the trains manufactured in Japan are on the way to Dhaka, DMTCL officials informed.

“I’m very excited by seeing the latest development of the project. I hope that the first phase can be opened by December 16 this year,” Planning Minister MA Mannan said while visiting the Uttara depot area recently.

“Japanese experts are engaged with the metro rail project being implemented involving the latest technology, but many of them could not join work due to the corona pandemic. Still, the work of the first phase is moving fast towards the finishing line,” commented DMTCL Managing Director MAN Siddique.

“Rail coaches will reach the depot on April 23. We’ll open the first phase on December 16 after completing the rest of the work quickly,” he added.

Currently, the work of MRT line-6 is going on in two shifts, he informed and expressed his firm determination that they would be able to complete the whole project by 2022, two years ahead of the scheduled time of 2024.

Some 52 establishments are being set up on 200 bighas of land in Diabari, Uttara. Of them, one third has so far been complete while 80 per cent work of the rest structures have been ready, according to DMTCL.

Work of 1500 volts (DC) power receiving station to facilitate train movement has come to end. A large workshop having 24 trains maintenance capacity at a time has also been ready to assist daily inspection and fixing problems of the trains.

Installation of all the overhead viaducts from the Uttara-Agargaon segment has been complete while a 7km rail line has been installed and the work of the stations are also underway in full swing.

After the arrival of the trains from Japan, their trial run will start in July in five stations from Uttara, DMTCL officials informed.

The trains are being shipped to Bangladesh after completion of the third party inspection conducted by DMTCL because of the corona restriction put in place by Japan.

Project officials informed that the metro rail will stay for 45 seconds in every station. A total of 54 passengers will be accommodated in every bogie.

A train with six bogies will be able to accommodate some 2,308 passengers at a time, seated or stand-by, during the peak time, while the number will be 1,738 for the usual time.

There will be special seat arrangements for women and wheelchair use facility for the handicapped people in each metro train.

The project work started in July 2012 with an expectation to finish it by June 2024. The present cost is Tk 219.85 billion of which Japan is providing Tk 165.94 billion as loans and the Bangladesh government is bearing Tk 53.90 billion.

Electrical and mechanical systems, rolling stock and depot equipment collection as a whole advanced 49 per cent.

The project’s 1.16km expansion work from Motijheel to Kamalapur in line with the Prime Minister’s directive is also underway. Currently, basic design and land acquisition are running while social study, stakeholders’ meeting and household survey have ended.